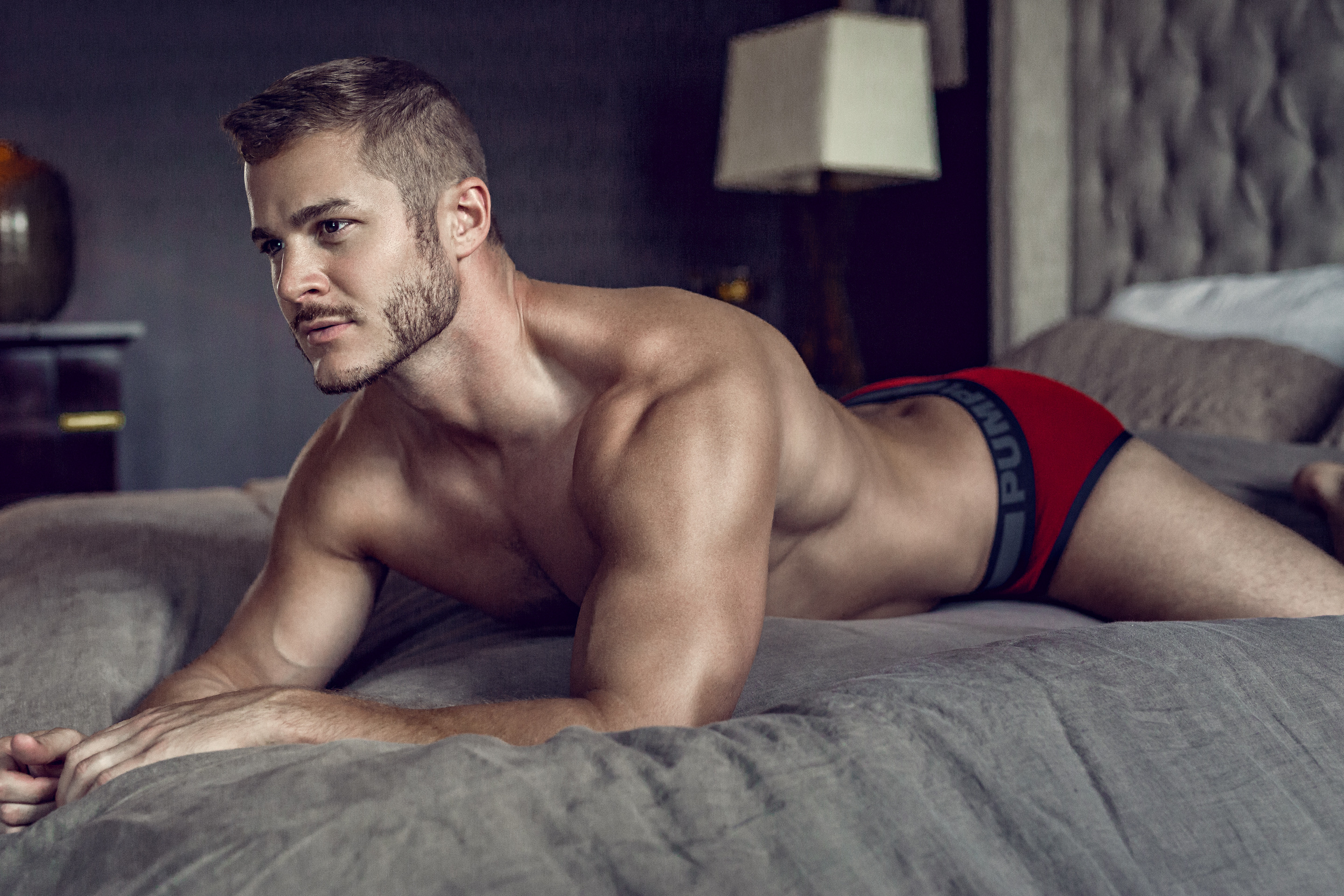 I first met Austin Armacost on the set of The A-List, Logo’s short-lived reality TV series about six gay men in New York who, we were told from the title, were supposedly the top of the heap.

Running from 2010-11, the show was much maligned for depicting Manhattan ‘Mos as shallow and bitchy and not a whole lot more, except, you know, pretty in a stereotypical way.

From the few episodes I watched, Armacost seemed a little bit scary and a lotta mean. I was nervous that my walk-on appearance was centered around his daily drama. Once the scene wrapped up—and later cut, God Damn it!—I somehow ended up having a conversation with him on a sunny Manhattan afternoon.

Armacost was polite, quiet, and studied, and, even though reality TV is hardly reality, I was surprised that he was nothing like the guy I’d witnessed on the set. I liked him, and felt a little disappointed that such a powerful medium as television had declined to show us a more interesting side of the man.

Given the opportunity to interview him some seven years later, I said yes immediately, thrilled to “re-connect” and get his un-filtered views on new projects, old demons, and life on the hunk list.

Here’s a sampling, for real… 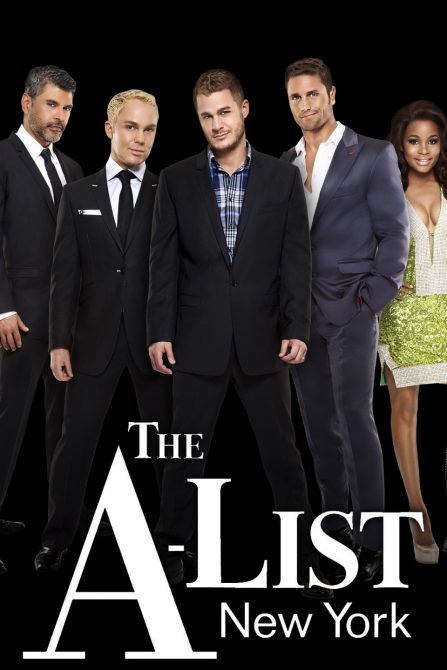 You replaced someone last minute for your stint on the adult pantomime Jack and His Giant Beanstalk. How did that go?

Scotty T is a very well known pop culture figure in the UK. Scotty was hired as Jack, the lead role, several weeks prior to the show’s opening night. Five days before opening show, Scotty pulled out. I got a call from the producer, Joe Purdy, five days before opening night. He asked if I was up for the challenge of picking up 84 pages of dialogue and taking the lead role in the show.

After four days of a three-hour commute, 12-hour rehearsal days, and intense line study, I was ready for the opening. We did 14 shows in three countries in a span of 11 days and it went great. I am so happy I dove into this project and the press has been good also.

You’ve spent a lot of time on reality TV shows, most notably “Celebrity Big Brother.” Do you find yourself getting typecast as “The Reality TV Show Guy”?

I don’t mind the title because it’s true. Yes, I have done dozens of reality TV shows. Because reality shows (mostly) show an accurate and truthful representation of yourself, it’s just me being me. Most people don’t realize there is so much more to me than just reality TV. I also do celebrity talent management and PR around the world, but mostly here in the UK. I am a successful global food and travel writer. I am, lastly, and most proudly, a homemaker to my wonderful partner, Darren, and our beautiful home in the northern England countryside.

Ever since “The A-List,” I think you’ve been seen as “The Bad Boy.” Is that an accurate description?

Well, I definitely feel that the term is subjective. “Bad boy” because I like to party, because I am truthful, because I don’t take shit from awful people, what? Haha! I am an open, honest, and truthful person but always like to deliver that truth the nicest way I can. I do like to strip down and be sexy often so maybe that is where the term comes from? Either way, yes, I think “bad boy” is accurate.

You’re moving in new directions with your global food and travel writings. What can we expect?

I bought a drone last year and it has taken my travel photographs to a new level. In 2018 my partner, Darren, and I visited over 20 countries, so anything from the snowy Blue Lagoon in Iceland to the bustling streets of Hong Kong to the beaches of Mexico…there is so much to see.

What can fans expect to see of you on your adult OnlyFans site and why did you make the decision to go that route?

As a lot of people know I was raped in my late teens. After discovering this person had HIV I was crippled by the thought of getting tested. My ex-husband knew of this situation so we were always safe together, but I never found the strength or courage to learn my status. I battled day by day, hour by hour, and minute by minute with my plethora of emotions. Eventually, I did get tested and it came back the way I wanted.

After struggling with my sexual desires for so long and then being tainted by this dark cloud of doubt and disease, I finally felt free. Darren and I are in a monogamous relationship and do not invite others in. I am what I like to call a solo exhibitionist and he is fine with that. I have found my “inner sex beast” and am fully embracing it. Let’s just say it is a lot steamier than my Instagram page and you do see parts of me you have never seen, which isn’t much. I am discovering and loving my body all over again.

In this day and age when HIV is both preventable and treatable, why did an HIV test scare you so much?

Being from southern Indiana, I was raised to believe that being gay was wrong. Although I stopped agreeing with that term from my early teens, the thought of becoming another statistic was terrifying. I did research daily and was constantly up to date with the latest breakthroughs and setbacks with treatment and prevention. Also, at that time, I was discovering my self-spirituality: What I believe, who I believed in, the afterlife, etc. I wasn’t ready to face my mortality at such a time of unknowingness.

Many people think that OnlyFans and male nudity are the waves of the future and that there will soon be no stigma attached to being naked on camera, even having sex on camera. Agree or disagree? 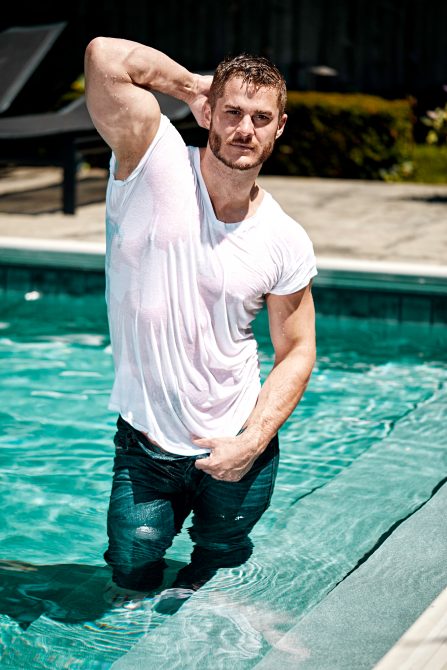 While I respect everybody’s choice to do what they would like on camera and share as much as they want, I don’t think I will ever be having sex on camera. My partner and I have a beautiful relationship and I have zero desire to share the most intimate act between us with anyone else.

I think, yes, the male form is beautiful in all its shapes and sizes and we need to stop being so prudish and celebrate that. The AIDS epidemic brought a screeching halt to the free-loving, happy go lucky gay community decades ago. Now with U=U and effective treatment and PrEP, I see the community moving back to that time of enjoying sex without fear. I certainly appreciate the nostalgia of it all.

What are your thoughts on  PrEP?

You’ve spent a lot of time showing off much of your body in photo shoots, Instagram, etc. Do you have any body issues yourself?

I typically prevaricate at questions like this, but, of course, I wouldn’t be “normal” if something about my body didn’t aggravate me. So, in all honesty, yes, I am not a big fan of my chest. I know people look at topless photos and say I have a great physique, but my chest does often not feel and look as good as I think it should.

Related: Austin Armacost is living his best life in the Mediterranean

But the most important thing here and what people should take away from this is that you can hate something on your body and still learn to accept it and own it. I tend to look at the positives with my physique and not drown myself in critiques about things that don’t really bother me.

Your body is big and beefy and sexy, and you also have some meat on your bones. Are gay men too obsessed with having an eight-pack or impossible body expectations?

Yes! On the whole, as a community, I see too much pressure being placed on the “perfect body.” If I wanted a 30-inch waist and an 8-pack I could have it. I like to enjoy the life I have worked hard for, though, and love beer and hot wings. I don’t possess the desire to look like a go-go dancer in West Hollywood and I find that a blessing.

I like my build and encourage everybody to embrace their physicality. I always say “be healthy and the rest will follow.” Don’t put too much pressure on yourself to look a certain way but more pressure on living your life healthily and happily.

As we discussed earlier, you were date-raped. Is there a lack of understanding in this society about men raping men?

Not only was I raped by a man, but I am a gay man raped by a gay man. Society doesn’t seem to differentiate between consensual gay sex and forced gay sex. I definitely feel a lack of understanding and compassion to mine and many cases of this type. I didn’t open up to anybody about what happened for several years because of that. When I did finally come to realize I did nothing wrong and had no part of the blame for this, that’s when I finally felt I could move on.

Did it change your own attitudes about dating and gay men?

Absolutely not. I was preyed on by a sick, sadistic, morally corrupt individual and did not carry any of that baggage on to future relationships.

How has the experience changed you?

I wasn’t a fan of publicly speaking about HIV/AIDS because of stereotype and stigma. Now, after sharing my story, I have helped so many people navigating their way through the same battle.

You live in the UK. How are sexual attitudes different than in the United States?

I have been in the UK nearly ten years now and what I remember of U.S. attitudes toward sex are probably antiquated at this point. Sex is ever-evolving and developing. What I can say is that men in Europe are much more free and open about sex, less clingy, and there is more sex “No Strings Attached” from what I remember in the States.

I have been to Thailand three times now and have my fourth trip booked for later this year. The beaches, the food, the entertainment, I just find everything 5 stars! And also, it is cheap as chips!

the wages of sin
20 comments

the wages of sin
20 comments