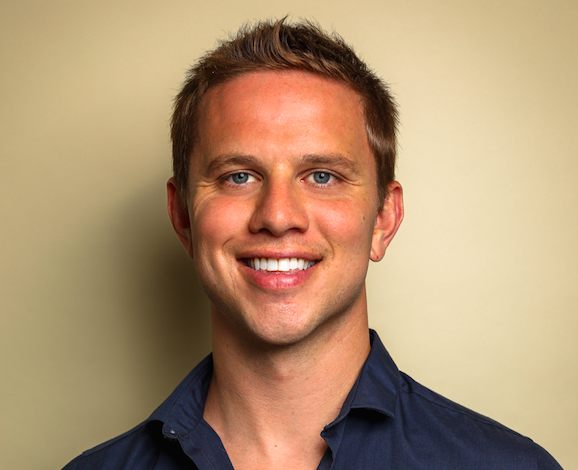 Author Robbie Couch is getting ready to release his debut YA novel The Sky Blues on April 6 through Simon & Schuster. The story centers around Sky, an openly gay teenager living a small Midwestern town.

Couch himself is openly gay and grew up in Clio, Michigan, a town with a population of less than 3,000 people. Though he drew inspiration from some of own experiences, he maintains the book is fiction.

Queerty was lucky enough to talk to Couch about his literary debut, growing up gay in small town USA, and the time he hand-delivered a dress to Gayle King at her apartment. This is what he had to say…

QUEERTY: What’s something most people don’t know about you?

COUCH: I hand-delivered a dress to Gayle King at her apartment in 2011. It was honest to God one of the most terrifying experiences of my life. Not because of anything Gayle did (she’s great), but because I had to trek the dress uptown on the subway as a very frail intern. If you’ve ever been on the MTA transporting anything important, you know all the ways things could go catastrophically wrong (coffee spillage, dropping it on the muddy ground, etc.). I was working at The Oprah Magazine at the time, and I was so scared of somehow f*cking up, ruining the outfit, and watching my career fizzle in front of my eyes. Fortunately, the dress got delivered and I survived to tell the tale. It felt like a very Devil Wears Prada moment, for sure.

The Sky Blues hits stores on April 6, but it’s already available for pre-order and is getting a ton of great buzz. What can you tell us about it?

Thank you for the kind words! I’m ridiculously excited. The story centers around Sky’s promposal to his crush, Ali. Things, as you may have been able to guess, definitely do not go as planned. Honestly, it’s kind of weird to be releasing a book highlighting prom — this big, coming-of-age social event — at a time when many teens won’t be able to have in-person dances for the second year in a row. That’s such a bummer for those high schoolers. But maybe, in a heartening way, it’ll make readers nostalgic for the pre-Covid world — and the world we’ll hopefully be returning to soon. (You didn’t hear this from me, but I think prom is overrated anyway.)

You mentioned in another interview that you first came up with the idea for the novel in 2016, right around the time Donald Trump was elected. What was it about his unexpected rise to power that inspired you to write it?

Thank you for asking about this. I was writing for Upworthy at the time, and my first assignment the day after the election was covering an unexpected surge in calls to LGBTQ youth suicide hotlines when it had been clear Trump won. Clearly, young queer people were terrified of having him in the Oval Office, and for good reason. At the same time, I’d been watching how Trump really resonated in white, rustbelt towns like the one I’d grown up in. It was disturbing to witness. Although The Sky Blues isn’t overtly political, witnessing Trump’s rise motivated me to tell a story that centered the perspective of a young, marginalized person feeling the brunt of bigotry in an insular town.

Coincidentally, you’re also gay and grew up in a small town, like the character Sky. What was that experience like and how did it differ from his?

Growing up gay in small town America was messy and terrible in many respects, but I also made lifelong friends in grade school and have a million wonderful memories from that period of my life, so it’s not a black-and-white thing. I was closeted in high school and Sky isn’t, so that’s a pretty big difference. I didn’t have to face homophobia in the same direct way he does. But my hometown had no shortage of racism, bigotry, and closemindedness, too, and much of that experience informed how I built fictional Rock Ledge, in northern Michigan, where the story takes place. I certainly wouldn’t compare The Sky Blues to a memoir, though. Sky’s experiences — from his relationships with his family and friends, to his promposal plans gone awry — are his own.

I’m a midwestern boy myself, although I grew up in the city. Still, I know very well the type of town you write about. Often these communities are portrayed as backwards places where everyone is homophobic and LGBTQ kids flee the moment they can. You definitely show an element of that in your book, but you also show a side to small town life that’s not all darkness and despair. Can you talk more about that?

Totally! You put that very well. Small Midwest towns, just like any community, are complicated. Although you’ll run into your fair share of hate, you’ll also stumble upon allies that step up when it counts. Without getting too far into spoiler territory, I’ll say that Rock Ledge High School may or may not end up surprising Sky, showing him that there are many more people in his corner than he originally thought. I hope young queer people know that’s often the case in real life, too. Even in the most backwards communities, there are folks out there who see and love you, even if they’re hard to spot sometimes.

You live in L.A. now. Why did you decide to leave your hometown? Do you ever think you’ll move back?

It was hard for me to see a future for myself in my hometown. After I graduated from college, I knew that I wanted to work in media, and there just weren’t as many options to pursue those dreams in mid-Michigan. Who knows if I’ll ever move back? Never say never, I guess! I have a fantasy of winning the lottery someday and owning property across America (who doesn’t?), and if that ever happens, I’ll definitely purchase a cozy log cabin in Michigan somewhere — preferably on a lake with great views of the sunset. In all seriousness, though, I have so much respect and admiration for LGBTQ adults living openly and proudly in small towns. Queers exist everywhere, and it can make a world of difference for a kid to have a role model that they can relate to right in their own backyard.

What would you say to the LGBTQ teenager or young adult who feels trapped in their small city or town?

I would tell them that the very moment that they’re reading this, there are people out there who will one day become their chosen family. Whether that’s folks who live down the block, across a state line, or on the other side of the world, one day you’ll meet the people who truly make your heart sing, and there will be no greater feeling in the world!

What is something you as a writer learned from the character Sky?

Oh my god, I love this question. One of Sky’s struggles is associated with his body. He has a burn scar on his chest from a car accident when he was a kid, and he’s still deeply uncomfortable taking off his shirt in public. I won’t give anymore away about that storyline, but I will say that writing it was incredibly cathartic for me, as I still wrestle with my own body image issues. Being able to approach Sky’s relationship to his body through his eyes helped clarify the challenges I still need to work through on my own.

Last question… What book are you reading right now?

I just started Ryan La Sala’s Be Dazzled, which is also queer young-adult. It’s so delightful. Then I’m determined to get to The Song of Achilles by Madeline Miller, which has been on my list forever. I’ve heard great things!