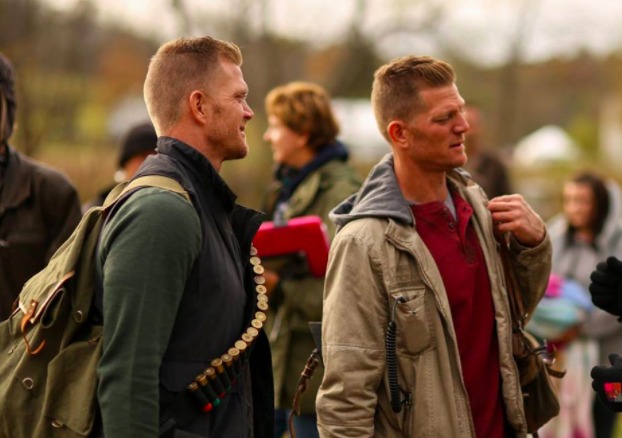 Hey y’all! The Benham Brothers are starring alongside homophobe Kevin Sorbo in a nw feature film!

The film is called The Reliant and is being described as “a faith-based action adventure with a strong emphasis on family, forgiveness, and faith through crisis.”

Sorbo, who spoke at the antigay Value Voters Summit alongside homopboes Kirk Cameron, Michelle Bachmann, and Donald Trump earlier this year, plays the part of Rick. Meanwhile, the David and Jason Benham play a pair of gun-toting twins (naturally) named Dave and Jase.

When the dollar collapses, widespread rioting and looting ensues, and five children tragically lose their parents in the chaos. Armed with a couple of their father’s weapons, they are able to survive in a stretch of woods on the outskirts of their burning town. Facing starvation and threats from encroaching gangs, they begin to doubt God’s love. Will God answer their prayers, or must their faith remain blind to facts?

In other words: It’s a piece of pro-gun Christian propaganda.

The piece of garbage, which will be released in 2018, was written and produced by Dr. J.P. Johnson, a faith-based filmmaker and family practice physician with a passion for guns.

As part of the film’s promotional campaign, Johnson gave away an AR-15 rifle to one lucky fan on Christmas Day. He says the giveaway was not only to promote his crappy new film but also to promote “responsible gun ownership.”