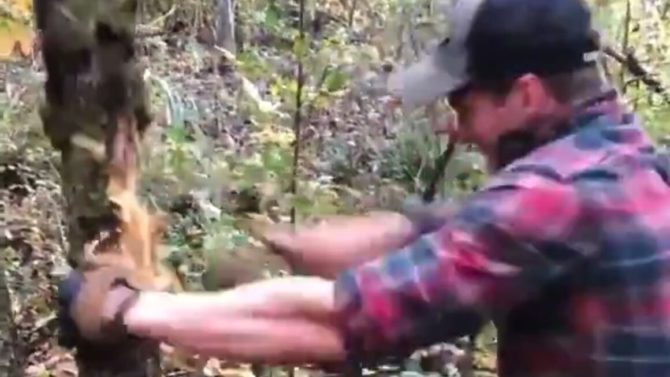 A truly bizarre video of newly elected Rep. Madison Cawthorn violently punching a tree is circulating on social media and we have so many questions.

The 19-second clip started making the rounds on Twitter over the weekend. It shows Cawthorn wearing tactical gloves and punching the bark off of what appears to be a rotting tree in the middle of the woods.

Why is Madison Cawthorn beating up this tree? pic.twitter.com/T4FcjiVQDZ

It’s unclear who filmed the video, when, where, or why, but it hit the internet after a particularly bad week in the press for the 25-year-old congressman from North Carolina.

First, Buzzfeed published a damning report in which more than 30 of Cawthorn’s former friends, classmates, and acquaintances accused him of sexual harassment, misconduct, and other inappropriate behavior.

The accusations included the homophobic lawmaker calling women derogatory names, interrogating them about their sex lives, forcing them to sit in his lap, grabbing and kissing them without their consent, and luring them into his Dodge Challenger, locking the doors, and taking them on “fun drives” to the middle of nowhere.

Then the Washington Post ran a story claiming he lied about that 2014 car crash that left him partially paralyzed.

Narrator: "The tree declined to accompany Madison Cawthorn on a 'fun drive' in his white Dodge Challenger" https://t.co/kjF0pzfUY5

So, let me get this straight. If I ever get into a fight with a tree, I want Madison Cawthorn on my side.

Progressive Democrats: Let’s rebuild our economy with a plan to reach 100% clean energy and create millions of new jobs in the process.

Madison Cawthorn: Watch me beat up a tree!

I’m not the Lorax, but I’ll speak for this tree. Madison Cawthorn needs to dial back on the roids. https://t.co/g31ae13kq7

To distract you from the numerous complaints of sexual assault & his constant lying about his background, that have been lodged against him?

It must not want to have sex with him

I was actually worried when I saw it that he was destroying a tree.
Maybe this is that rage many of his accusers have mentioned.

If a tree falls on Madison Cawthorn, and no one is around to hear it, does it really make a sound?