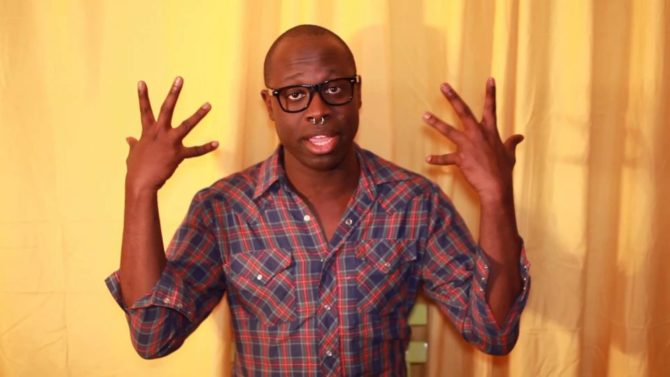 Yesterday we shared RuPaul’s Drag Race season 8 winner Bob the Drag Queen’s reaction to the rush to attack RuPaul over some insensitive comments about gender. Today, Bob has sparked a whole new debate over how Drag Race fans interact when they meet a famous queen.

While we’re assuming this first tweet relates to the RuPaul/gender debacle, it could really be applied to either situation:

Sometimes I think this community will kill itself. The conservatives won't have to do it.

Things got heated (again) when Bob wrote this soon after:

If you meet a person from TV in person, who's work you admire, and they don't seem excited to meet you, try and understand that they probably aren't excited to meet you. You can't expect them to be as happy in that moment as you are.

Seems fairly reasonable to us, but it didn’t sit quite as well with some fans.

And those fans went in, and Bob went in deeper.

Here are some examples of the back-and-forth:

Except you’re being paid by these people to be professional and interested as any service or retail worker will tell you. And they get minimum wage. Other queens can do it. You went around the UK dismantling any reputation of activism, care or friendliness.

Activism, and care don’t stem from smiling at people on yr streets of London.

What were the rude things I did?

You assume i didn’t want to be there. But what were the rude things I did? Did I yell at anyone, say something rude, speak in a disrespectful tone, call someone out of their name. Because you think I don’t look nice I was rude.

Oh bloody hell. Yes, you spoke and acted rudely to people. Couple that with no smiles, no warmth. You’re a nightmare. Look at your replies to people on here! Professionalism Bob. People paid your bills and you failed to do anything near what others queen achieved.

But what were the rude things? I’m genuinely interested

Also I’ll happily chat in DMs if you wanted, as dragging things out publicly is symbolic of all that’s problematic with social media and you’re an artist on a pedestal of our making, but also a human. There’s things to learn, and ways to learn.

Another thread was much more positive, but even still, someone found a way to be upset about it:

Both times I met you, you made me feel important & that you appreciated my time. It wasn’t “excited,” but it felt far more genuine and valuable than to me. Thank you for that.

I didn’t make you feel important. You decided to feel important in that moment. You gave yourself permission to feel good about yourself. That’s the true gift.

I didn’t make you feel important. You decided to feel important in that moment. You gave yourself permission to feel good about yourself. That’s the true gift.

That was the most disheartening thing I’ve ever read omg Bob I get your point but don’t try and upset someone who is actively thanking you for your impact on them pic.twitter.com/XxVabfHzjP

I feel like you all are reading a different tweet. It’s not mean AT ALL. It says. “I can’t claim that victory. That was yours. I was just standing there.” But for some reason you want it to sound mean. So it does in your head.

For the record, that’s exactly how I – the person you said it to – took it. I didn’t feel that it was mean at all.

Not sure how it got misinterpreted, tbh.

And it didn’t end there:

So let me get this straight? You saw me on the street. Asked for a picture, I said yes, more than likely said “thank you” as you walked away, and your upset about it?

You are coming off a bit entitled. It’s a gift to be able to impact the lives of many people. Not everyone has that opportunity. It’s understandable that as a human u don’t always feel like being “on” but every encounter with a fan shouldn’t be dry. calm down u aren’t Beyoncé.

This may shock you, but I am entitled. I’m entitled to what I have. That’s why I have it.

And it can all be snatched away from you. Far more successful people have lost it all. Be humble.

Snatch what away? Do you think I’m rich, do you think I live in a mansion. I live in Washington Heights above Harlem, and what I have is because I worked hard and create quality content. Not because I fake smiled at people.

ok but if a celebrity isn’t excited to meet fans then is it even worth meeting them??

That’s for you to decide. Do you only l want to interact with people of they do what you want then to do?

If I’m meeting a celebrity when they aren’t obviously doing something else taking up their attention, or at a designated meet up, I would want them to be happy to meet me. That’s more the circumstance I was referring to lol

considering and respecting others wants is necessary, no argument there

The thread goes on for longer than we care to embed, but here are two quick interactions that distill it all down.

I guess grace wasn’t on the list with charisma, uniqueness, nerve, and talent.

Once again for the record: I’m not graceful, and I’m not nice. I’ve never claimed to be.

2. If dropping the fake smiles means fewer fans, he’s perfectly OK with that:

Hmmmm u should probably pretend to be excited since entertainers need fans or they wouldn’t have anyone to entertain. ?????

I’d rather be true with fewer fans, than fake with tons of them.

We’re much more interested in the talents Bob brings to his career than we are in holding him to the unreasonable expectation that success requires living life with a constant demand for selfies.

He’s set to appear in Tony Kushner’s Angels In America at the Berkeley Rep this year:

The full cast of Angels In America at the @berkeleyrep.