Favorite work out venue: I’m not that person who is regimented on staying in shape with a workout routine per se. My workouts are at the bowling center. I need to bowl frequently for long periods of time. In a tournament, you’re on your feet for 10-12 hours at a stretch, so strong legs are important to me. I go to Del Mar Lanes near my house.

Do you have a favorite exercise playlist? Absolutely. I listen to music when I’m competing, whenever I’m allowed to wear headphones. I was the first bowler to wear the iPod with the headphones running down my back to my back pocket. I won the first tournament I did that at: $10,000. Gwen Stefani was playing. Of course I listen to Madonna, Cher, Robbie Williams. I’m a sucker for good pop.

What’s the best outfit for working out? I would prefer to wear shorts year-round since I live in Houston and it’s hot. The tournament mandates attire in most cases, but some mandate dress pants. When I bowl in tournaments I have to wear custom made jerseys with my name on the back.

Best work out food? During a tournament, I always eat a good breakfast, whether that be a bowl of oatmeal or a couple of eggs with toast. I need a fair amount of protein or carbs to hold me. While I’m bowling I drink Diet Mountain Dew and water. I drink a ton of water every day.

How do you balance staying in shape and having fun? It’s very difficult. Fortunately, we have a pool and I like to swim. It keeps me active. Instead of sitting on the couch we’re in the pool. I’m not the fittest person, I’ll tell you that. When it comes to bowling, I have great stamina. I can bowl all day. I can’t say the same about some of my friends who are in better shape!

Related: Nashville trainer Steven Shupe on how to reject shame and learn to love your body

What’s a basic, if useful, work out tip you can offer? I think bad practice is worse than no practice. If you’re not going to commit and put yourself in a situation that mirrors real competition, I don’t know that there’s a huge value to it. When I practice, I get into the mindset of “go” time. I put my headphones in. I don’t socialize. When I’m done bowling, I’m a chatty Cathy. When I practice, I try to replicate that.

How did you get into bowling professionally? I’ve done this my whole life, since I was three. The culture has changed in our sport in the past 10-15 years. We’re one of the only sports that handicaps professionals. There will be tournaments that pay as much or more than professional tournaments, but will not allow professional players. I wasn’t a member [of the PBA] until I turned 50.

I read somewhere that you have bowled 300 games 58 times. How to you maintain your skill? How do you get in the right frame of mind?

I have this conversation with myself on the way to the venue. I take all of the conflict in my mind, and I address it then and there. I take all the negativity out of my mind. I put it in a box and it’s done. When you’re playing a long game, there are so many things that can go wrong and f-up your mental game if you allow it. In my younger years I went to a sports psychologist—Jack Christiansen—and the first session he said to me “If you want to win, you have to do what’s important now.” Meaning stay focused, in the moment. That’s visualization. For me, I visualize myself executing the best shot ever. I can close my eyes now and remember the feeling when I let a shot go and it won me $25,000. So visualization is huge.

You’re the first out-queer person to compete in the Bowlero series. What’s the attitude like among professional bowlers when it comes to LGBTQ people? Do you encounter a lot of homophobia?

Absolutely, especially in the early years. I came out officially at 28. But from that point on, the people in my area knew who I was, and I’d already established myself as a bowler. I remember going to this one tournament on a Sunday night. I had a friend named John who was as queenie as you could get, but he was totally straight. One of the guys I’m bowling against, that I was beating, he was getting frustrated. And he said something about “your f*ggot boyfriend.” And I turned to him and said “In about two minutes you’re going to go tell all your friends that a f*ggot beat you and you lost.” And everyone was howling, because he lost. It doesn’t bother me. It might have rattled someone else.

Yes. There’s now an international gay bowling organization. They ran bowling for the Gay Games, and it’s the second largest subculture of bowling. I will say in almost every major city the largest league is usually the gay league. It’s really nice to come together in a social situation with like-minded people, meet people and enjoy each other.

What is it about bowling that makes it so accessible to everyone?

That’s the beauty of our sport: you can take it to the highest level, or you can just do it with your friends. That’s what I love about our industry.

What do you keep on your nightstand?

My phone charger, a wordsmith puzzle book and usually a cat. We have four cats and a couple raccoons. We have four of our own, and a neighbor cat that lives across the street. He comes in our cat door. We also have raccoons in our neighborhood. One night we came home and found one chowing down on the cat food. So I broke down and started putting food out for them. Now they eat out of my hand. The cats and the raccoons, they all get along. They sit side by side. It’s crazy.

Bonus Pics of Jay in action…and his pets: 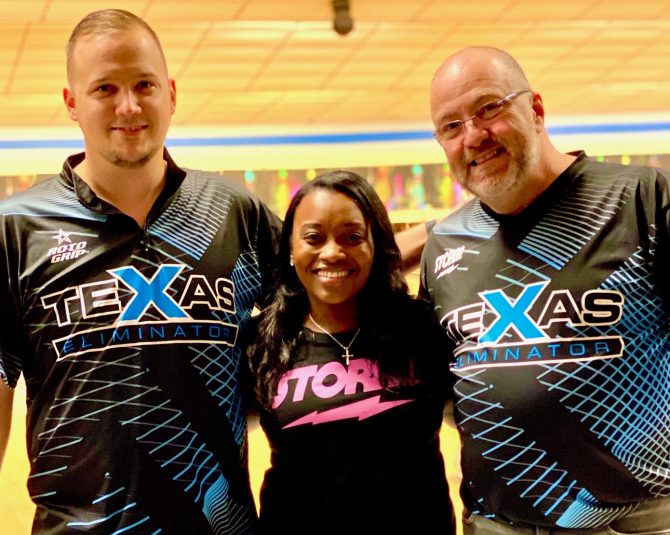 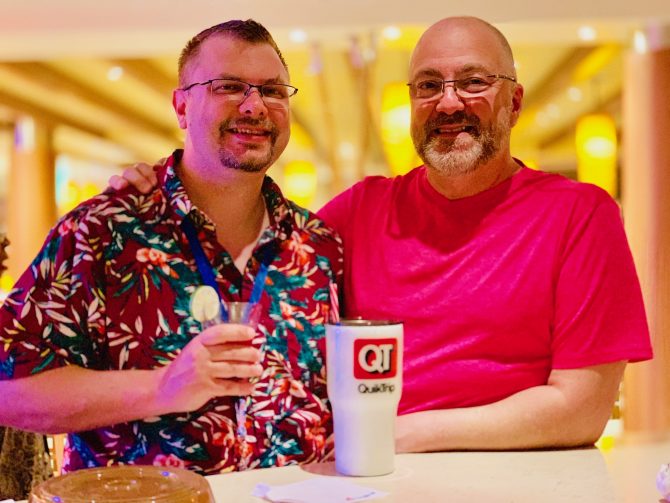 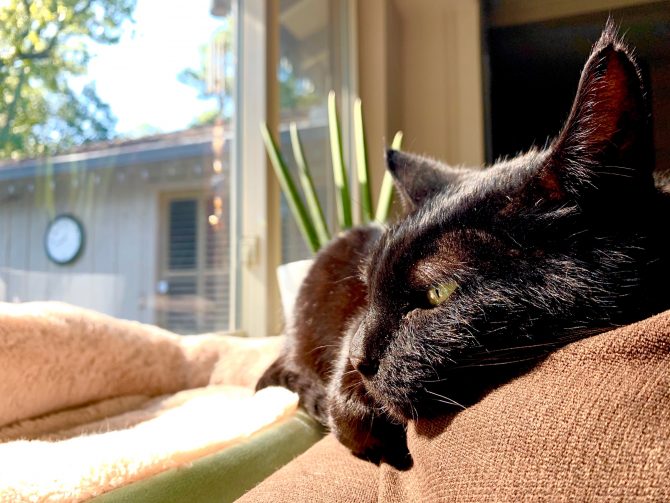 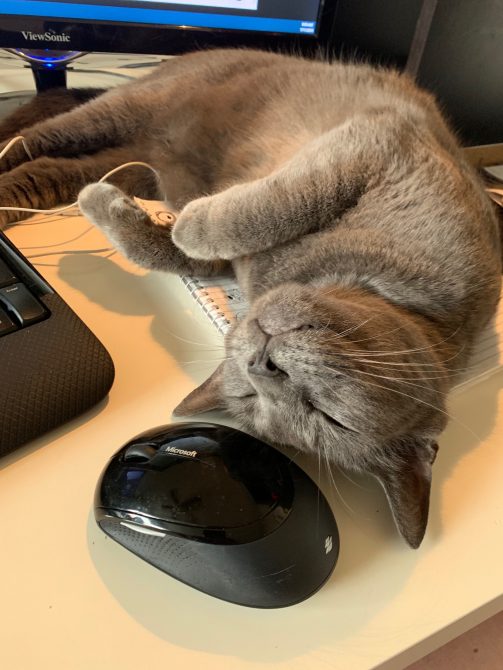 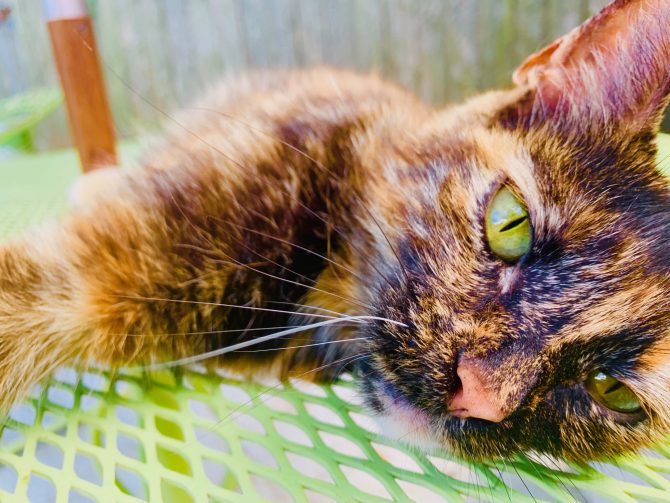 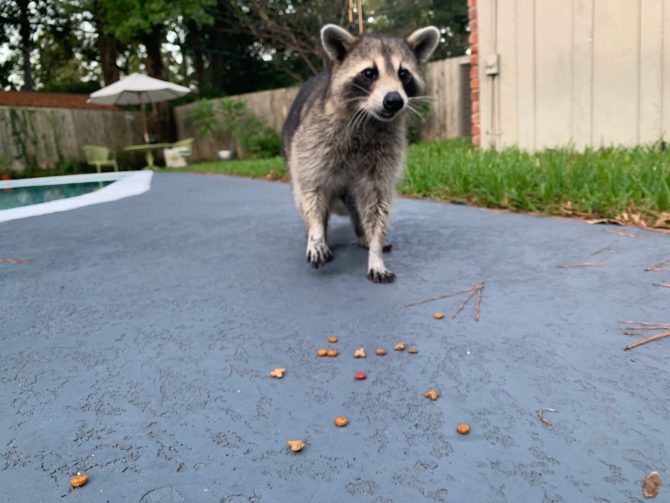