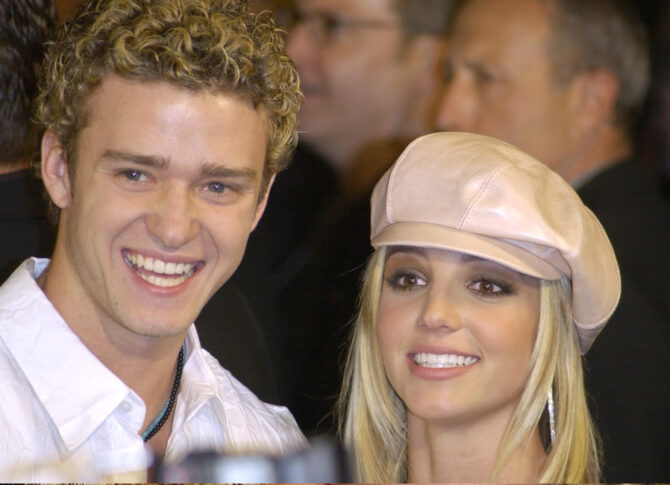 Recently liberated pop singer Britney Spears appears to have issued a public lashing against her ex-boyfriend, Justin Timberlake. In a now-deleted Instagram post, she slammed the singer, as well as her mother and sister, for exploiting her in the media to cash in on her fame.

Spears, 40, has spent most of 2022 speaking out about the exploitation she endured as a result of a 13-year court-ordered conservatorship. A judge in Los Angeles finally ended the conservatorship last year.

Now Spears has vented again on social media. Newsweek reports that the singer took to Instagram on March 28 to further complain about her family, and her ex.

The video in question featured Spears in a long skirt set to Dusty Springfield’s “Son of a Preacher Man.” Speaking to the camera, she recounted a story of having a vision of Jesus, who told her people had used her fame for their own financial gain. 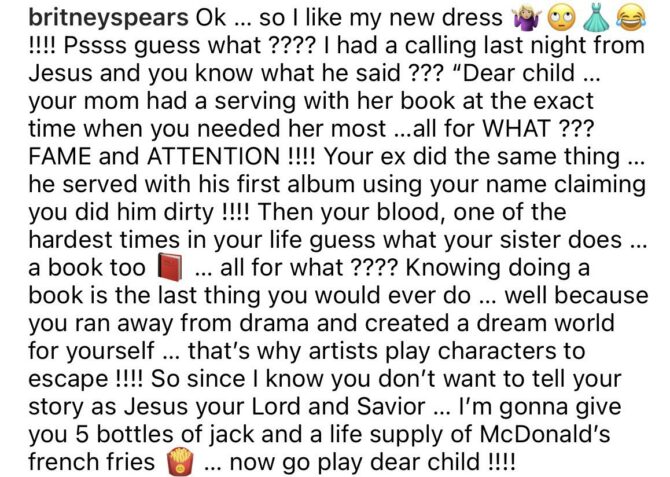 “I had a calling last night from Jesus and you know what he said ??? ‘Dear child…your mom had a serving with her book at the exact time when you needed her most…all for WHAT ??? FAME and ATTENTION !!!! Your ex did the same thing…he served with his first album using your name claiming you did him dirty!!!! Then your blood, one of the hardest times in your life guess what your sister does…a book too [book emoji]…all for what ????'” she wrote in the accompanying caption.

Related: Britney Spears is getting ready to spill all the tea and we’re probably going to need a few mops

“‘Knowing doing a book is the last thing you would ever do,” she continued, “well because you ran away from drama and created a dream world for yourself…that’s why artists play characters to escape !!!! So since I know you don’t want to tell your story as Jesus your Lord and Savior…I’m gonna give you 5 bottles of jack and a life supply of McDonald’s french fries…now go play dear child !!!!'”

It’s worth noting that Spears didn’t name Timberlake by name, though many feel the references in her post point to him.

The couple dated from 1999-2002 as both their careers reached new heights. In November 2002, Timberlake left the boy group *NSYNC to start a solo career. His sophomore single, “Cry Me a River”, was widely speculated to be about his break-up with Spears, especially after the accompanying video featured a Britney look-alike. In a 2011 interview, Timberlake confirmed the speculations to be true.

Recent years have also seen him come under fire for his treatment of Spears in the public eye. Defenders of Britney have specifically attacked him for discussing their sex life in a 2002 interview, and for exploiting their relationship in “Cry Me A River.” Timberlake apologized for his behavior in 2021, saying “I care deeply about the wellbeing of the people I love and have loved. I can do better and I will do better.”

Spears’ recent Instagram post also sees her renew her ire at both her mother, Lynne Spears, and sister, Jamie Lynn Spears. Both have published “tell-all” books about their life with Britney. Jamie Lynn’s book, released earlier this year, portrayed her sister as paranoid and unstable. Britney has denounced the book on multiple occasions, claiming that Jamie Lynn took advantage of Britney’s money during her conservatorship.

Despite deleting her post, Britney has managed to set Twitter on fire with her takedown of Timberlake, her mother, and sister…

OH WE ARE LATE BUT BRITNEY SPEARS ABSOLUTELY HATES JUSTIN TIMBERLAKE AND WE ARE HERE FOR IT pic.twitter.com/lWExiMEpuJ

LOL, Britney tagged Justin Timberlake one time this year and he was only tagged because was a performance they did together… pic.twitter.com/4Fd497FAZV

If Justin Timberlake was genuine about any of the apologies he made about Britney in the past year. He would delete Cry Me A River from Spotify & his discography in general. But you know ?

the fact that this is the first time Britney talks about how Justin treated her when they broke up… she must have kept so much pain inside trying not to cause drama, i hope she let it out everything that hurt her, and who hurt her can suffer the consequences

It’s good to see that Justin Timberjerk gets what he deserves.
Ever since I first heard the way he talked about Britney on that radio, I've been disgusted with him.
Lynne and JL, you're way more disgusting than he is. #JusticeForBritney pic.twitter.com/FdnfS260Cm

Britney Spears has finally called out Justin Timberlake for using her name for fame pic.twitter.com/pewF46Kj06