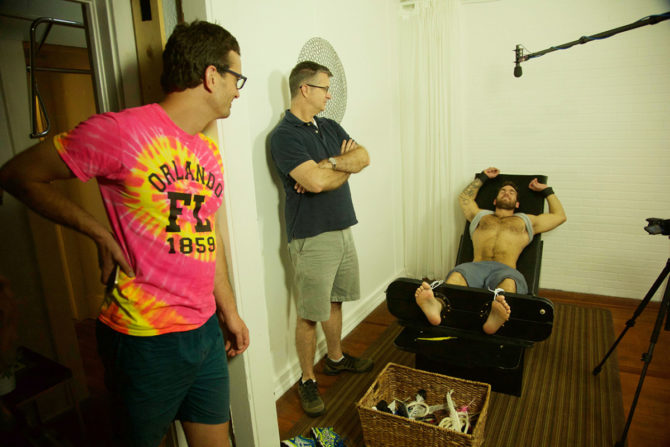 Anyone here ever enroll in “competitive tickling?” If you’ve never heard of the “sport,” you’re not alone. In 2014, New Zealand-based queer journalist David Ferrier stumbled on several videos of competitive tickling and decided to investigate the origins of the clips. The production company associated with the videos replied with homophobic insults, which only made Ferrier more determined. He journeyed to the US in hopes of finding some of the “players” who participated in the clips, as well as the mysterious producers behind them. Little did Ferrier realize, he’d stumbled on an obscure fetish community, and one eccentric gay man determined to bully Ferrier into silence.

Tickled begins as a playful look at an oddball fetish, but quickly turns dark as Ferrier discovers a group of men intimidated into silence, and a very homophobic producer who seems to get off on explicitly homoerotic imagery. Moreover, what looks like good, clean fun at first glance begins to reveal itself as a form of real torture: the men in the videos giggle, but the real appeal of tickle torture seems to be the forced subversion of their will. We’ll not reveal the final twists to Tickled here, other than to say what begins as a goofy romp ends as a portrait of journalistic determination, and a glimpse into a very disturbed mind. Weird and captivating, Tickled runs the gamut from titillating to terrifying. You won’t be able to look away…even when you want to.