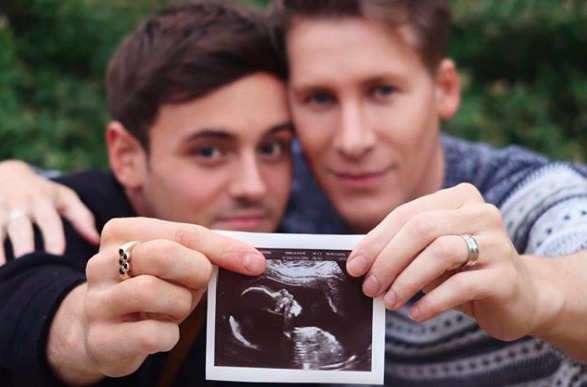 Why They Matter: Black won an Academy Award for his screenplay Milk, the Harvey Milk biopic, while Daley won two bronze medals in Olympic diving competitions.

Why We’re Proud: Black and Daley are very good at what they do. But what sets the power duo apart is their dedication to activism. Rather than pursue more commercial projects, Black has told the stories that sympathetically depicted our long struggle to middle America. Milk dramatically recreated the tumultuous political years in San Francisco, and When We Rise, based on the Cleve Jones autobiography of the same name, covered some of the same areas in an ABC miniseries.

Daley, for his part, came out in a YouTube video in 2013, shocking no one. He dealt gracefully with trolling blowback, and has maintained a thriving social media presence (yes, we have to admit we love his flirtatious pics), often pushing for equality on an international scale. In his native UK, Daley has lobbied Parliament for repeal of anti-gay laws in all Commonwealth countries, as well as in nations where he’s competed in diving events.

Champions of marriage equality, Black & Daley got engaged in 2015 and married two years later. In 2018, the announced an addition to their family by releasing sonogram images of their first child together which they will welcome through surrogacy.

The announcement incited a whole lotta hate from internet trolls. That includes some gay trolls, who, oddly enough, object to using a surrogate, to two men raising a child or both.

The couple’s experience as activists came in handy. In a statement, Daley pointed out the double standard people seem to have with a gay couple using a surrogate: “Take Kim Kardashian, for example – she used a surrogate and there wasn’t any issue with it. There is an element of difference in terms of the way we’ve been treated.”

And he’s right. Defending equality doesn’t just end with marriage; rather, it extends to all aspects of life, including parenting. Watching Black and Daley defend their relationship, their choices as parents, and most importantly, their forthcoming child (a boy, incidentally) makes us proud.

It also shows that they’ll be great dads. Take that, trolls.