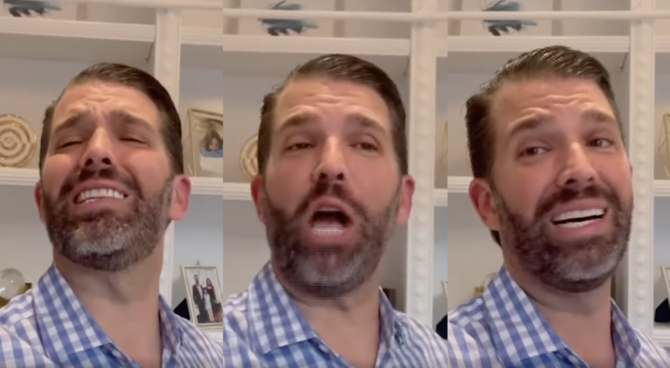 Generally speaking, the Trumps tend to exhibit a “no publicity is bad publicity” mentality when it comes to any sort of media coverage. But even Don Jr. appears to realize that maybe, just maybe, the batsh*t crazy video he posted over the weekend went a little too far.

Quick recap: On Sunday, Jr. published a truly bonkers four-and-a-half-minute video to his Facebook page titled “Pathetic: Biden can’t read a teleprompter!” in which he made all sorts of wild claims about… um… we’re not entirely sure.

Don Jr. is on another bender. The pressure must be getting to him. His deranged, slurred, unnatural, speech is clearly drug fueled. pic.twitter.com/4QBth83fDj

Almost immediately, he was trending on Twitter, with thousands of people wondering whether the ex-president’s son was drunk or high or both. After going viral for all the wrong reasons, Jr. then pulled a classic move from the Trump playbook and attacked a trans person on Twitter.

At the same moment everyone was sharing his video, he fired off a tweet blasting Lia Thomas, the transgender swimmer from the University of Pennsylvania who made an impressive showing at the Penn-Harvard women’s dual meet over the weekend.

Not only did Thomas win the 100-yard and 200-yard freestyle events, but she took the anchor leg in the 200 medley relay that finished third, and the second leg as part of a Penn 200-free relay quartet that placed second.

“It’s almost like she has some sort of unfair advantage?!?” Don Jr. tweeted, along with an article by the New York Post detailing Thomas’ achievements.

It’s almost like she has some sort of unfair advantage?!? https://t.co/mzMKRhMpr7

OK, first, when you’re the son of an alleged billionaire, you don’t get to whine about someone else having an “unfair advantage” in anything. Nobody will take you seriously. (Not that anyone takes Don Jr. seriously as it is.)

Second, Thomas was allowed to compete in the women’s dual meet after the NCAA Board of Governors changed its policy on trans athletes to be more inclusive.

On January 19, the NCAA Board of Governors announced that the transgender student-athlete inclusion policy crafted in 2011 would be replaced by a sport-by-sport approach similar to the International Olympic Committee guidelines that will go in effect in March.

In a statement, Penn’s athlete department voiced support for Thomas:

Penn Athletics is aware of the NCAA’s new transgender participation policy in support of our student-athlete, Lia Thomas. We will work with the NCAA regarding her participation under the newly adopted standards for the 2022 NCAA Swimming and Diving Championship.

After firing off the transphobic tweet, Don Jr. then retweeted his own tweet, presumably in an effort to make sure everyone saw it.

But if he thought attacking Thomas would make people forget about his own crazy video or the fact that he’s in deep sh*t with the New York attorney general’s office, who is currently seeking his testimony in an ongoing civil investigation into the Trump family business, he can think again.

Here are just some of the comments…

Did you find a good criminal defense attorney yet?

I am concerned for your mental health. Please get help.

You think she might be on some kind of performance enhancing drugs?
Or what your on? https://t.co/k6i17hMDwH

I’m sure she’s drug free, though.

this must have been happy hour ?https://t.co/FKpS8HpMUu