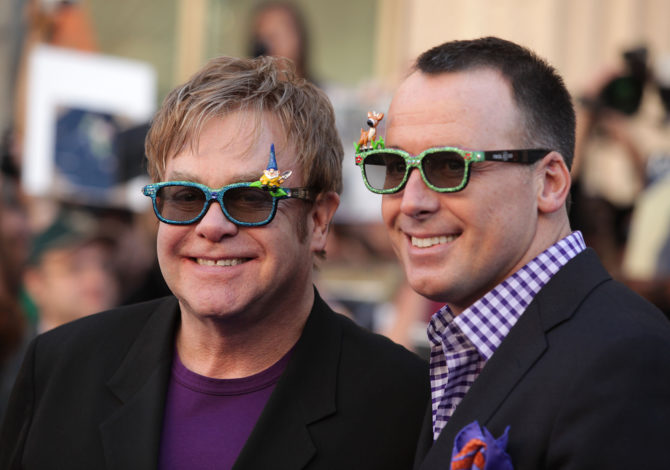 What they have contributed: Elton John has carved out one of the most successful careers in rock history. Since the 1960s, the singer, songwriter, pianist, and composer has penned some of the most memorable and best-selling songs ever written: “Your Song,” “Don’t Let the Sun Go Down on Me,” ” Goodbye Yellow Brick Road”—more than 50 Top 40 hits in total. Critics have uniformly praised the combination of his original songwriting, powerful playing, and soaring vocal range, while John’s flamboyant, campy style has made him a fashion and culture icon as well.

John’s penchant for powerful, evocative melodies has made him a lasting sensation with audiences of all ages and nationalities, but it’s his remarkable honesty about his personal life that has really set him apart. John first came out as bisexual in 1976 in a historic Rolling Stone interview, during a time when even the biggest stars remained in the closet. In the same magazine, he amended that declaration to say he identified as gay in 1992 and referred to himself as “homosexual” in a sit-down with Barbara Walters in 1994. John is now on his farewell tour, a massive three-year rolling event set to cover North America, Europe, and Australia. The Queen knighted him in 1998.

David Furnish began his career as a photographer and advertising executive before moving into film production. He met John at a dinner party in 1993, and the two engaged in a civil partnership in 2005 before upgrading to marriage in 2014. Though he still writes for magazines like GQ and Interview, Furnish primarily organizes fundraisers for the Elton John AIDS Foundation and plays dad to the couple’s sons, Zachary and Elijah, both born via surrogacy. In 2018 John and Furnish partnered to executive produce the film Rocketman, a musical biopic of John that’s currently taking the Cannes Film Festival by storm and set to release nationwide on May 31.

Couldn't resist one last pre-Xmas challenge. I also wore this crazy costume on The Muppet Show. See if you can find it in the animation for my "Looking Up" video. Link to video in bio. @rocketentertainment @islandrecords @virginemi #LookingUp #WonderfulCrazyNight

Why we’re proud: Following charges that Bohemian Rhapsody might have underplayed Freddy Mercury’s homosexuality, both John and Furnish have assured that Rocketman will in no way downplay or “straight-wash” John’s sexual orientation. Rather, the film will remain an authentic telling of John’s life and career, complete with setbacks and John’s struggle with his identity, regardless of how that may offend studio executives or affect the box office haul.

International cinema is complicated, and sadly the world isn’t a homogenous place. I heard Bohemian Rhapsody is going to China with any reference to Freddie being gay taken out of it. Well, you can’t do that with our film, I’ll tell you that. It’s integral to Elton’s journey as an individual and as an artist. I would strongly resist any sanitization. The world continues to need to evolve and grow in the right direction. As it goes into that international distribution and marketing machine, you just have to do your best to preserve integrity.

Of the film, John adds: “It had to be as honest as possible. The lows were very low, but the highs were very high, and that’s how I wanted the film to be.”

The world according to Sir Elton and David as told to Queerty: What should Pride look like at 100?

We hope Pride at 100 is not an LGBTQ-specific celebration. We hope that all of our communities are fully integrated and accepted into society and there isn’t the need to exceptionalize people in order to give them dignity. At 100, Pride should be a celebration of human dignity for everyone—the Pride we take in being true to who we are and who we love, and being accepted and respected for that.