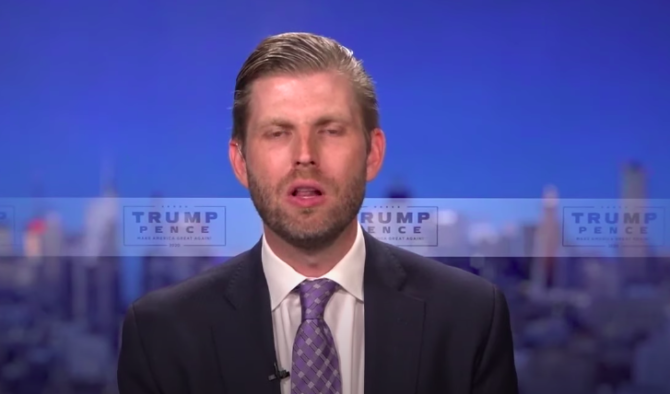 We can never decide which one of Donald Trump‘s adult sons dumber, Don Jr. or Eric. Both brothers give each other a run for their money. This week, however, Eric is the clear winner.

Yesterday, the 37-year-old tweeted a link to the website DoYouMissMeYet.com, which takes you to a picture of Donald Trump standing on a stage with his arms out in front of an American flag.

According to GoDaddy, the domain was purchased on December 28, 2020, presumably by someone in Trump’s camp, since Eric is now promoting it on Twitter. That timing is interesting, since it suggests they knew the election was over well before that whole “Stop the Steal” rally that led to the January 6 insurrection on the U.S. Capitol.

Not long after Eric promoted the site, someone else created a parody version called DoYouMissMeYet.co, which takes you to a picture of Donald Trump and his three eldest children with the words “F*ck No” plasted in front of their faces and a link to some random person’s VenMo page.

Judging by the responses to Eric’s tweet, it doesn’t appear very many people miss the Trumps at all…

I honestly forgot you existed.

Like I miss a severe case of hemorrhoids. Go away!

God no! The same way I miss those bad abdominal cramps I had with food poisoning maybe.

Literally NO ONE misses @EricTrump
🤣🤣🤣🤣🤣🤣

Not at all but betting you’re missing the big grift.

I had breast cancer once. And an infected hang nail. And a root canal. And a broken ankle. And explosive diarrhea. And a blazing hangover in college. I don’t miss any of those, either.