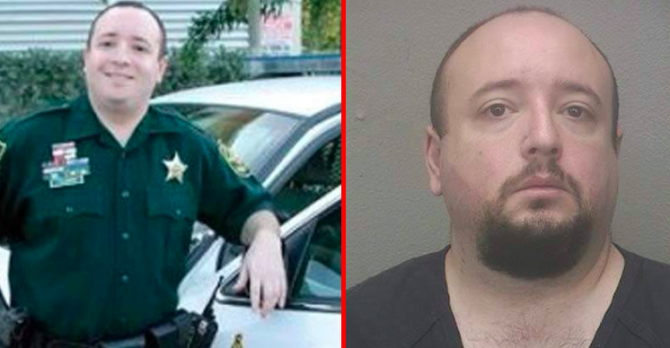 Ex-cop Jonathan Bleiweiss says he’s turning over a new leaf less than four years after pleading guilty to cocering nearly two dozen illegal immigrants into performing gay sex acts on him in exchange for not being deported.

Quick backstory: In 2009, Bleiweiss was named a Broward Sheriff’s Office district Employee of the Year. As an openly gay officer, he was considered a “star deputy” and the picture-perfect liaison to the LGBTQ community.

Then it was revealed that beneath his officer friendly exterior was a sexual predator who preyed on vulnerable young men, most of whom were illegal immigrants.

Approximately 20 young men, all of whom were strangers to one another, told investigators that Bleiweiss preyed on them, molesting them during pat downs and then asking for their phone numbers so he could abuse them again later.

In 2015, a judge sentenced Bleiweiss to five years in prison plus 10 years of probation after he pleaded guilty to 14 counts of armed false imprisonment, 15 counts of battery, and four counts of stalking.

After serving only about three and a half years, Bleiweiss is now out on probation and… serving as executive director and board treasurer of a new nonprofit called the Florida Justice Center.

The name could easily be confused with the Florida Justice Institute, a highly regarded public interest law firm that represents “Florida’s poor and disenfranchised,” according to its website.

The website for Bleiweiss’s outfit says, “We provide free and low-cost lawyers to those accused of crimes, assistance with bail, and connections to social services.”

One thing they have in common is that both have IRS tax-exempt status, allowing them to accept tax deductible donations.

Bleiweiss’s non-profit legal center consists of just three board members and was incorporated in March of this year as Broward Law Inc. before changing its name in September.

Speaking to Florida Bulldog, Bleiweiss explains that he’s come a long way since his days of raping undocumented male immigrants. The shift happened while he was in prison and found himself among people of many different races.

“I saw the racial disparity that existed in there,” he says. “It’s something I never fully understood until I saw it.”

“Inside, they felt they never really had a chance. I wanted to fix that, I wanted to do what I could to help these people that I met inside.”

So Bleiweiss decided to go from preying on the weak to… helping the disenfranchised. Or something.

According to Bleiweiss’s website, his non-profit connects “at-risk young adults” to “quality legal representation, bail assistance, connections to social services, and the tools they need to succeed.”

But there’s a catch. The non-profit only helps poor young men of color who are between the ages 18 and 30. In other words: The same demographic of Bleiweiss used to target when he was a police officer.

Broward Public Defender Howard Finkelstein tells Florida Bulldog that he doesn’t trust Bleiweiss or the “legal services” he claims to be providing.

“It sounds like ‘I’ve got a website, send me money, and I’ll spend it’,” he says. “I have no idea what he’s bringing to the table that he wants money for. I’m not aware that he has a stellar reputation in the legal community.”

Related: Rapist Cop Admits He Forced Male Immigrants To Do Gay Things With Him