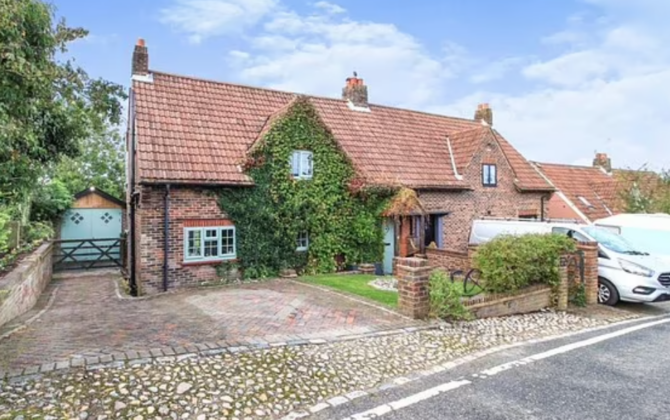 A gay couple in the UK thought they’d found their dream home, but the listing turned out to be a total nightmare once they contacted the sellers.

Lachlan Mantell, 37, a television producer for ITV, and his partner Luke Whitehouse, 33, had been looking to buy a house for a “long time,” Mantell told the Daily Mail.

The couple finally found a listing they loved in Surrey, just outside of London, through estate agent Purplebricks.  They contacted the sellers — Luke Main, 33, and his wife, University of Cambridge medical physicist Dr Joanna Brunker, 34 — to set up a viewing.

But first, the sellers had some questions. “Would you mind telling us a bit about your position and circumstances?” they asked Mantell and Whitehouse.

Mantell shared their employment information and explained why they liked the neighborhood, but the sellers’ response was the real bombshell.

“We’re sorry if we seem intrusive,” Main and Brunker said, “but we just want to make clear that we would be unwilling for two men in a partnership to view or buy our house. 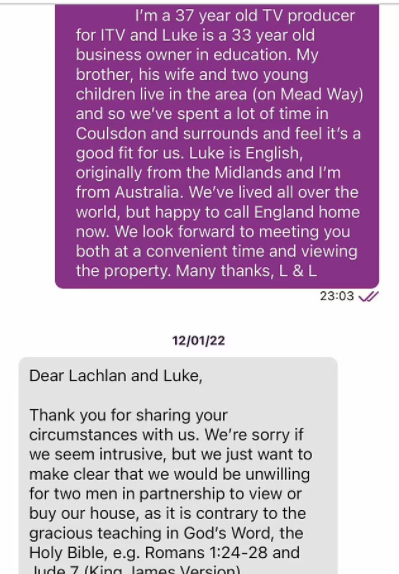 Those passages refer to “unnatural lust” and the story of Sodom and Gomorrah.

“Initially for the first 10 seconds I laughed. I thought it was a joke,” Whitehouse said.

“But then I was upset and angry and I had a cry on the phone to my mum. Homophobia still exists, it is still out there. I did not see it coming. I was blindsided by it.”

The couple shared the comments with Purplebricks, which promptly removed the listing and issued this statement: “The sentiments expressed in this message are completely opposed to Purplebricks’ views and values.

“We have contacted the seller to return their fee and request that they sell their property with a different agent.”

Gay rights activist Sasha Misra additionally told the Daily Mail in a statement: “It is shocking to hear that a gay couple were turned away from buying a property because of their sexuality.

“Gay people should be able to rent or buy property wherever they choose and should not expect to be treated differently because of who they love. Instances like this hark back to an era when it was commonplace to treat lesbian, gay, bi or trans people unfairly, refuse their custom or turn them away from accommodation – and it simply has no place in Britain today.”

When the sellers were contacted for comment, Main said he would need to speak to his wife first.

“Not that we’re ashamed of what we said in any way,” he added.