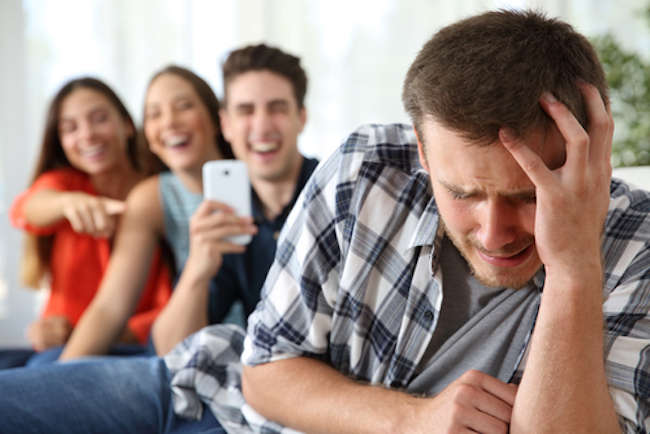 Friends don’t want to see him anymore. They don’t want him around at all, naw. They’ve let poor Adam slip through the cracks, and suddenly they won’t give him the time of day.

He’s watched his social media presence get whittled down to the barest nubbin of its former self. He’s a pariah. An outcast…

Parties? Well, those are a thing of the past. No one wants him at their fete! Nope, not at all…

Because he’s a Trump supporter.

“I am not a sex offender,” he writes, in a drool-inducingly longwinded op-ed piece published by The Federalist.

“I am something even worse than that. I am a Donald Trump supporter.”

Since he was “raised in a liberal Jewish family in Washington DC,” Levine says it…

“was always a given that Republicans are bad people, representative of that shameful sliver of our flawed society that values money above the planet and think the world would be better off if everyone were a straight, white male. At a minimum they are racist, misogynistic and homophobic.”

Related: These Guys Are Gay And Voting For Donald Trump

But as he matured, he began to feel that liberal policies were “problematic”:

For the first time in my progressive life, standing up for the values that I most strongly espouse—truth, morality, self-reliance, boundaries, tolerance, and a healthy dose of Jewish skepticism—was damaging my reputation and character. When I publicly opposed my dad’s support of the Iran deal, I was admonished. I had few friends with whom I could have a civil political conversation: one stopped all communication with me for two weeks because Trump won the presidency.

If Republicans are bad, Trump is nothing less than Satan embodied. Post-election family gatherings devolved into group Trump-bashing, which intensified as more rumors of my dubious views wafted across town. I did not even bother going to gay pride because it was fused with a Resist march. If you do not want to impeach our president, you have no place in gay life.

He claims he’s been called a white supremacist by former friends, too. And not surprisingly, he was dropped by a “self-anointed giant” of the gay civil rights movement, too.

Related: Here’s what happens when a drag queen comes out as a Trump supporter

But he thinks it’s all been worth it, because he’s found his people:

I found out almost immediately that the Republican Party is not only not evil, but populated with nice, intelligent, humble people. Days after I added myself to the Log Cabin Republican mailing list, I saw an invite to attend a gathering with Chadwick Moore, an independent journalist and one of two lapsed gay Democrats I had heard of.

He concludes with this startling revelation: He lives on Earth.

“If the struggles of the LGBT and Jewish peoples have taught me one thing, it is that I count, I matter, no more or less than any other man—precisely not because of my sexual preferences, or the God I worship, but because I am a citizen of planet Earth. The knowledge there is a major political party that extends this creed to its members has restored a deep-seated hope inside of me for my country’s future.”

What do you make of all this? Are these “I’m-a gay-Trump-supporter-and-everybody-hates-me” articles the new “I-moved-out-of-New-York-City-and-have-never-been-happier” think pieces that make our eyeballs bleed?