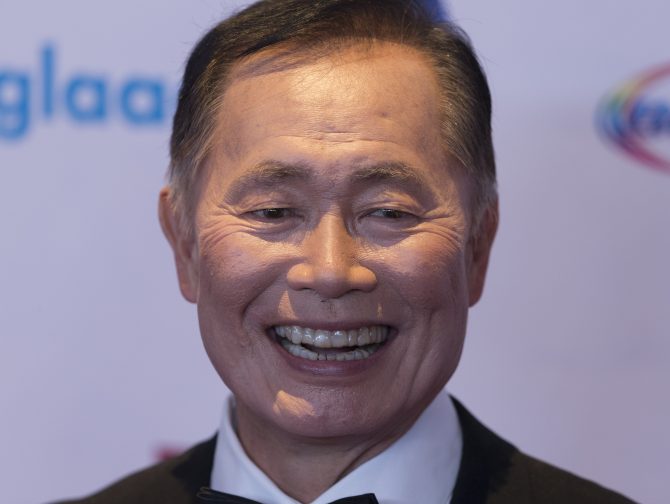 This profile is part twenty of Queerty’s 2020 Out For Good series, recognizing public figures who’ve had the courage to come out and make a difference in the past year, in celebration of National Coming Out Day on October 11.

Bio: Born Hosato Takei in 1937, George Takei spent four years of his childhood living with his family in U.S.-run internment camps, as anti-Japanese sentiments ran rampant during World War II. “It has shaped me,” Takei said of the experience during a 2019 talk. “As a teenager I learned about the internment and the injustice. My father said, ‘You have to actively participate.’ It was the internment and my father’s good guidance that made me the activist that I am.”

As an actor, Takei is best known for playing Hikaru Sulu in the original Star Trek television series, though he recently starred in the second season of AMC’s The Terror, a horror story that revisited the forced relocation of Japanese Americans in the 1940s.

Coming Out: Takei publicly came out as gay at 68 years old in a 2005 interview with Los Angeles’ now-defunct Frontiers magazine. He revealed that he had been with Brad Altman, his now-husband, for 18 years.

“It’s not really coming out, which suggests opening a door and stepping through,” he said at the time. “It’s more like a long, long walk through what began as a narrow corridor that starts to widen.”

How He Made a Difference: With his massive platform — including a Facebook profile with 9.9 million fans — Takei has promoted marriage equality, supported LGBT youth, campaigned to end LGBT bullying, called out xenophobia, and worked to keep the memory of the internment camps alive.

In recognition of his work, GLAAD awarded Takei with the 2014 Vito Russo Award, which is “presented to an openly lesbian, gay, bisexual, or transgender media professional who has made a significant difference in promoting equality.”