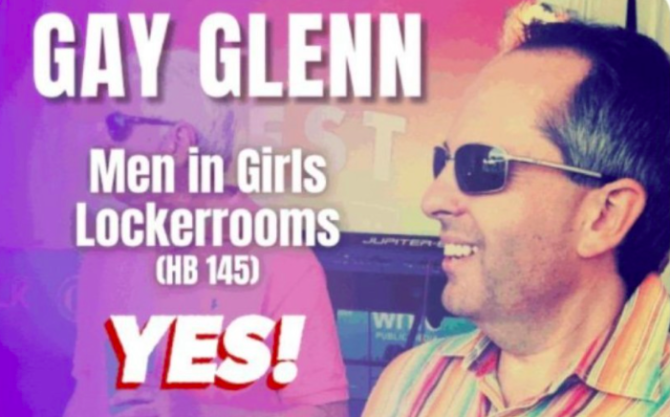 A Republican candidate currently running for Virginia lieutenant governor is suing after someone sent a homophobic mailer and group text message accusing him of being “a gay Democrat.”

Del. Glenn Davis Jr., who is straight, just filed a defamation lawsuit in Norfolk Circuit Court demanding $100,000 in nominal and compensatory damages plus another $350,000 in punitive damages against an unknown defendant.

The text, which was sent last week, urged delegates for the GOP’s upcoming convention to help Davis “come out of the closet” by not ranking him in the convention and to support his opponent Tim Hugo, who is “the only conservative running for Lt. Governor.”

Meanwhile, the mailer, which was paid for by Hugo’s campaign, claimed Davis not a true Republican.

Both the text and the mailer featured identical imagery of Davis attending a 2010 Pride event wearing a rainbow-striped shirt.

Davis has accused Hugo of being behind the attacks. Last week, he took to Twitter to call him out: “Tim Hugo sent a mailer attacking me for participating in #Pridefest with @RPofVB. I’m sorry for my colleague’s #homophobia, but I don’t believe the government has any place in our bedrooms PERIOD.”

Tim Hugo sent a mailer attacking me for participating in #Pridefest with @RPofVB. I'm sorry for my colleague's #homophobia, but I don't believe the government has any place in our bedrooms PERIOD. pic.twitter.com/Fed7ql7EDR

He believes he’s being targeted for not being totally 100% opposed to LGBTQ equality like most of his Republican colleagues. But we still wouldn’t consider him a pro-gay candidate, even if he attended one Pride festival one time 10 years ago.

While he doesn’t actively work against LGBTQ people (thanks, Glenn!), Davis did support Donald Trump and he pals around with a lot of homophobes. On top of that, one of his campaign platforms is “religious freedom,” which everyone knows is code for the legalization of homophobia in the name of Jesus.

We’d describe his attitude toward non cis het people as tolerant, which is better than most Republicans. But he’s a lukewarm ally, at best.

In the lawsuit, Davis says he “unapologetically supports equal treatment for the LGBTQ community” and that “his support of the community does not give an anonymous Defendant authority to send text messages to voters labeling him as ‘GAY.'”

And in a statement about the lawsuit, he called the text “unethical, illegal, and scandalous” and warned, “If bad actions are allowed to go without repercussions, we will never see honesty, integrity, and civil discourse return to GOP politics.”

"These unethical, illegal, and scandalous tactics are detrimental to our party, civil discourse, and the efforts…

Posted by Delegate Glenn Davis on Tuesday, May 4, 2021

Meanwhile, Hugo has denied having anything to do with it, calling the text “ridiculous and offensive” and swearing that it didn’t come from his campaign or any of his associates.

“A recent text sent attacking my opponent Glenn Davis is NOT from our campaign,” Hugo said in a tweet. “We condemn the language used in this ridiculous text. The text that went out tonight falsely identifying as us was illegal. We intend to track down those responsible & hold them accountable.

A recent text sent attacking my opponent Glenn Davis is NOT from our campaign. We condemn the language used in this ridiculous text. The text that went out tonight falsely identifying as us was illegal. We intend to track down those responsible & hold them accountable.

But his campaign manager, Dustin Rhodes, defended the mailer in an interview with local media, saying it was sent out to expose Davis’s “liberal voting record” and noting that the image was taken from Davis’ public Facebook page.

So, just to recap: Davis says he “unapologetically supports” LGBTQ people even though he’s campaigning on a “religious freedom” platform. Hugo says nobody from his camp sent the text message, but his campaign manager admitted to sending the near identical mailer.

If you ask us, all of these guys are assholes.