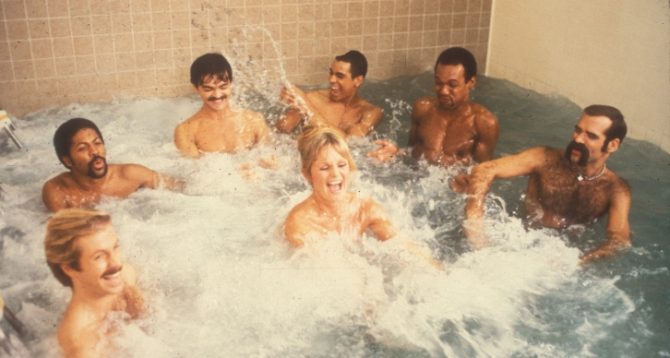 Victor Willis, a member of the famed pop group The Village People, has something he wants you to know: contrary to popular belief, the song is not about gay men hooking up at the Y.M.C.A.

“NOTICE ABOUT Y.M.C.A,” Willis wrote on Facebook. “News and Twitter trending of Y.M.C.A. is off the chart right now with false accusations about the song. But as I’ve said numerous times before (and this was proven in federal court), I wrote 100% of the lyrics to Y.M.C.A., so I ought to know what my song is about.”

“Y.M.C.A. is one of the most iconic songs in the world,” Willis concluded. “I will not stand idle and allow it to be defamed. Therefore, I will sue the next media organization, or anyone else, that falsely suggests Y.M.C.A. is somehow about illicit gay sex. Get your minds out of the gutter please! It is not about that!”

NOTICE ABOUT Y.M.C.A: News and Twitter trending of Y.M.C.A. is off the chart right now with false accusations about the…

Willis further elaborated in a comment on his post. “There is no Gay subtext to Y.M.C.A.,” he unequivocally declares. “Did Village People record songs with a Gay subtext? YES we did! But YMCA is not one of them. In fact, the Gay songs all appeared on the first album. But by the second album when I started writing lyrics, Jacques Morali and I moved our music away from that, and into the mainstream. This is why the second, third, fourth, and fifth albums were far more successful than the first album because the music was moved away from that narrow focus. But some assumed we continued. We did not. This will all be flushed out in the upcoming Village People motion picture.”

The motion picture in question refers to an unofficial announcement by Willis in August 2020 that a new biopic of The Village People is in final negotiation stages. Further details on the film have yet to be made public.

Willis & “Y.M.C.A.” landed himself in the news earlier this year for his sharp criticism of use of the song by the Republican Party at rallies. Willis also attacked Donald Trump for the use of The Village People tune “Macho Man” at campaign stops. Willis requested Trump stop using the song, but stopped short of filing legal action.