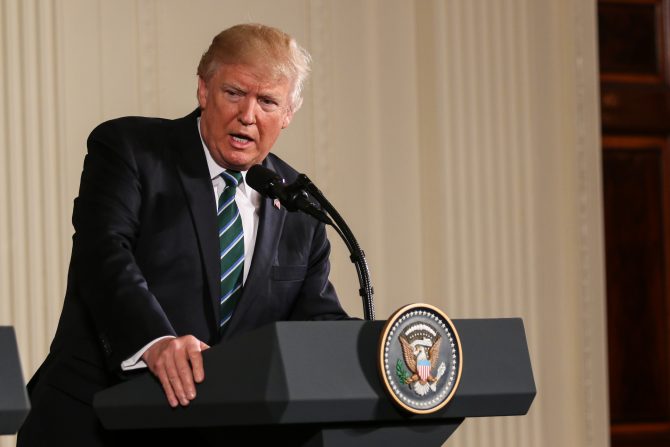 Have any gay anthem lyrics ever spoken more to the current state of the nation?

Well, yes — “I Will Survive” or even “Dancing on My Own” come to mind, but President Trump opted to blast the Village People’s “Y.M.C.A.” as he angrily stormed out of a press conference over the weekend. Robyn would have made just as little sense.

Related: Trump threw a rally on a tarmac in Florida and nobody came

The President / former steak salesman was speaking to reporters Saturday from his Bedminster, New Jersey golf club where Paula Reid of CBS News grilled him on his least favorite subject: facts. Specifically, whether he was actually responsible for enacting the Veterans’ Choice program, a claim he’s made over 150 times. (Spoiler alert: President Obama signed it into law in 2014.)

Trump then abruptly ended the event and stormed off the stage…as the opening of “Y.M.C.A.” blared from the speakers.

You can watch the harmonious moment in the second video:

Trump gets frustrated when @PaulaReidCBS won't stop trying to ask him a question about why he keeps lying about Veterans Choice, then abruptly ends the news conference as "YMCA" plays pic.twitter.com/Z3uVxebKGH

Vox reporter Aaron Rupar had plenty else to say about the cringey conference.