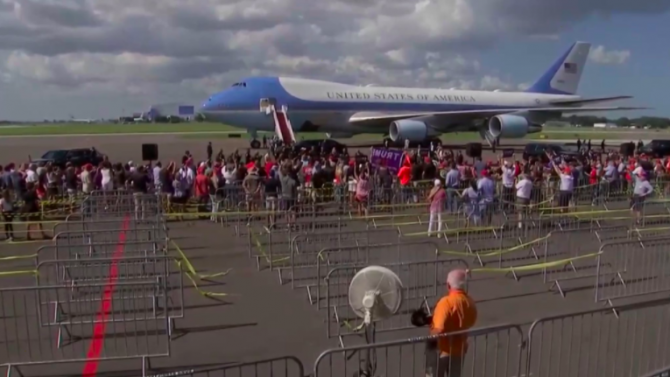 Trump held a campaign-style rally on an airport tarmac in Florida on Friday, but nobody came.

The Hill reports that Trump was greeted by a few dozen supporters when he touched down in Tampa. Of the few dozen attendees, very few wore masks or practiced social distancing, though at least the event was held outdoors.

“If Joe Biden is elected president, the chaos and bloodshed will spread to every community in our land,” Trump warned the crowd, ignoring the fact that the “chaos and bloodshed” currently happening across the nation has all been under his watch.

“There will be no safety, no security, no peace, no justice, no one to protect you and no one to defend the American way of life!” Trump raged.

The speech lasted roughly 30 minutes, during which Trump made hardly any mention of the coronavirus pandemic, which has hit Florida especially hard, with more than 470,000 reported cases, the second-most of any state.

Today, Trump held a rally in Florida & the crowd was nearly empty. They expected 10,000 supporters & less than 200 showed up.

None were wearing masks.

This photo was take while Trump was speaking, not before & not after.#Biden2020 pic.twitter.com/4mBWxynams

I knew the majority was silent but now their apparently invisible pic.twitter.com/KUzSVykvZ0

This is trump’s Florida Fan Fail.

Many tens of people.

In case no one showed up, he would have at least one “fan”?

I’ve seen a bigger crowed at the DMV. pic.twitter.com/XBtdIWgJky

Did he get taken by a group of 14 year olds on TicTok again? Or are his supporters in the hospital?

Whadyamean? He’s as popular as his Oklahoma rally! And just look at the diversity! pic.twitter.com/tk1CLpI7Iw

The rest of the crowd wanted to be there, but they’re dead.

not exactly an overflow crowd at Trump’s speech in Florida pic.twitter.com/uS2o0fptNE

“My visits last week to Texas and Florida had massive numbers of cheering people.”
As with many other terms, Trump doesn’t know the meaning of the word massive.
I know Melania concurs. pic.twitter.com/5GQFXnrV1p

Related: Trump campaign bus crashing into dump truck with Mike Pence on board is the perfect metaphor for 2020