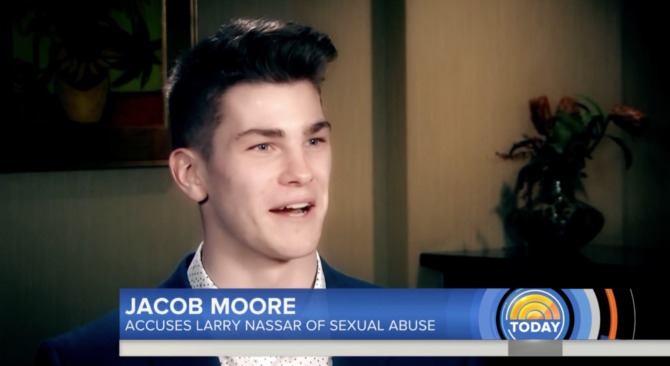 A male gymnast has joined the hundreds of young women who have accused disgraced USA Gymnastics doctor Larry Nassar of sexual misconduct.

18-year-old Jacob Moore is a freshman at the University of Michigan. He first connected with Nasser two years ago when he went to see him with a shoulder injury.

In a shocking new interview with NBC News, he claims during the course of his treatment, Nasser  performed acupuncture on his pubic area then asked a female gymnast who was also present if she’s ever seen “a male body part.”

“I wasn’t a dumb kid,” Moore, who was 16 at the time of the abuse, says. “I knew what medical practices were, and that one was out of the ordinary.

He adds, “I felt very uncomfortable.”

Moore’s sister Kameron was also one of Nassar’s alleged victims. She actually provided testimony at the disgraced doctor’s sentencing back in January, where she mentioned Jacob.

“Me and my sister shouldn’t be able to relate over the fact that we’ve both been abused,” he says. “I hope he rots in hell.”

Nassar was sentenced to a maximum of 175 years in prison.

Related: This young man is doing his part to break down the stigma that still surrounds male sexual assault