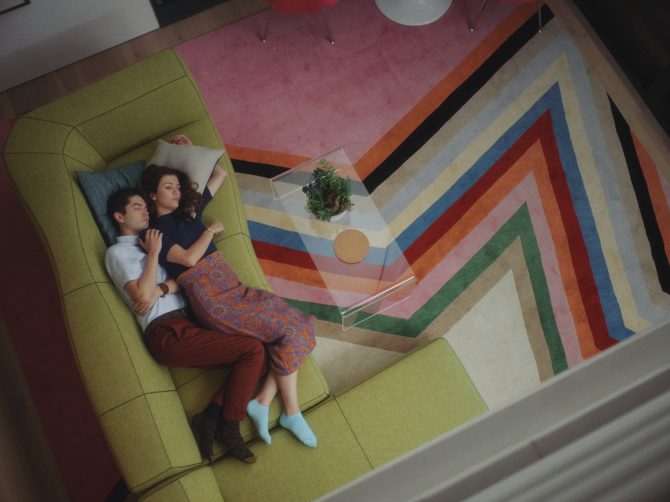 We have a Paula Abdul song stuck in our head. And we can’t bring ourselves to tell James Sweeney, the soft-spoken director of the movie Straight Up. The romantic comedy plays at Outfest July 23 & 24 in Los Angeles.

Sweeney moved from his native Alaska to Los Angeles to study film at Chapman University. After several attempts at launching an acting career, Sweeney moved into casting, moonlighting writing and directing short films. His acclaimed shorts The First and Before Midnight Cowboy both earned slots at Frameline, the celebrated San Francisco-based queer media arts festival, and helped him generate enough buzz to drum up funding for his first feature, Straight Up.

In Straight Up, Sweeney plays Todd, a gay man with OCD who associates gay sex a bit too closely with all things fecal. When he meets Rory (Katie Findlay, of How To Get Away With Murder), a lonely, struggling actress, he decides to “go straight,” indulging in a sexless emotional relationship, much to the shock of his friends. While Todd and Rory find plenty to enjoy in one another, one question lingers: can they be in love without ever wanting to have sex?

Straight Up channels the screwball comedies of yesteryear like What’s Up Doc or Bringing Up Baby into a romantic comedy of a different kind. We snagged a few minutes to chat with Sweeney about his feature film debut.

Where does this project begin for you?

Well, I started writing it at the end of 2012. So it’s definitely, as you say, my baby for quite a while now. I finished the first draft in 2013. We shot a proof of concept for it in 2015 when Fox Digital Studios was interested in the project, but ultimately, they really wanted to cast YouTubers and I really wanted to play the role myself. Everyone says trying to make your first feature is like going to war…

It felt like that. There were a couple of times where the project was coming together then fell apart. So it’s definitely been an exhausting process trying to get it made. I just told myself “I have to do it, it will be my first feature.” But at the same time, I’m really glad that it happened the way it did with this cast and team behind it. All the right people came together.

So you’re pulling a Woody Allen here. Writing, directing and acting as a vert neurotic character here. This is both your first feature as director and your first as an actor. What convinced you that you were up to the task? Even writing a part for yourself, that’s a huge workload.

Well my background is actually in theatre. I went to film school and was actually an acting major, I just didn’t really pursue it. I tried; a lot of Rory’s storyline is something I went through. Auditioning for commercials was something I was terrible at. I never had a theatrical agent. It’s really hard to be an actor in LA, especially having been on the other side of the camera. It wasn’t for me. Also, I’m a specific type. Nowadays there’s more openness for a certain kind of diversity, but when I was right out of college, nobody was willing to take a chance on me. I would hope to act more in the future, but this was a huge leap of faith. It was a big undertaking.

Totally. Now how fast did you shoot? What was your schedule?

We didn’t go overtime because we couldn’t afford it. The nice thing was that we didn’t need a ton of coverage. So, the shot list was specific and concise which lends itself to minimal setups. Thankfully, it also lends itself to the aesthetic of the film. I think every day started slower and at the end of the day we’d cram it all in.

Todd reminds me of a number of people I know, both for the analytical personality and the “gross-out” factor—that sex, or gay sex, is icky, even though he is gay. When you created the character, what backstory did you have in mind for a gay man afraid of gay sexual intimacy?

I think that’s mostly linked to his OCD, and his aversion to germs and bodily fluids. That’s a real phobia for him. In my backstory, I imagined that he’d been through behavioral therapy and had actually been much worse, but he’d worked out a lot of the kinks to the point where he’s highly functional. Ultimately though, there are barriers he hasn’t been able to work through. 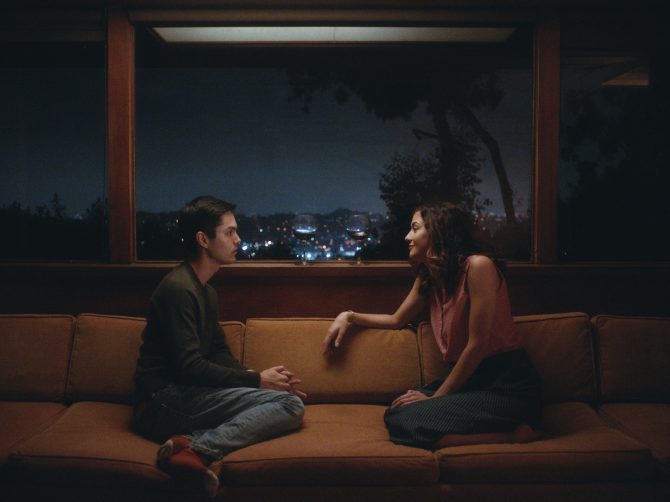 So then for you as a writer, where does this idea of a character—a gay man terrified of gay sex—come from?

On an emotional level, I think the whole genesis of the film started from the place of wanting to bring together two people who didn’t see a lack of physical intimacy as “settling.” I was very much in a place when I started writing the film that I didn’t feel like I fit in with the dancing crowd at The Abbey. Being newly out myself at the time, I had a very heteroromantic view of the world. I was a lot more naive then, and a lot more sheltered. I come from a conservative family. Then obviously, the story grew and the characters evolved. And there’s Rory’s side of the story too, her sexual trauma. The idea was that these two people have two different reasons for feeling unlovable and not wanting to commit to a sexual relationship.

Todd’s also a frustrating character. We see how desperately lonely he is, how stunted. But at the same time, he’s so inflexible and utterly terrified of his sexuality. Did you ever worry that audiences would reject him? Did you worry he’d be unrelatable or unlikable?

Yeah, even on set. I won’t say who, but one of the people on my team, after one of my takes said “Did you mean for Todd to be unlikable? Because when I read the script, he wasn’t.” I was like oh, ok, let me go cry in a corner now! 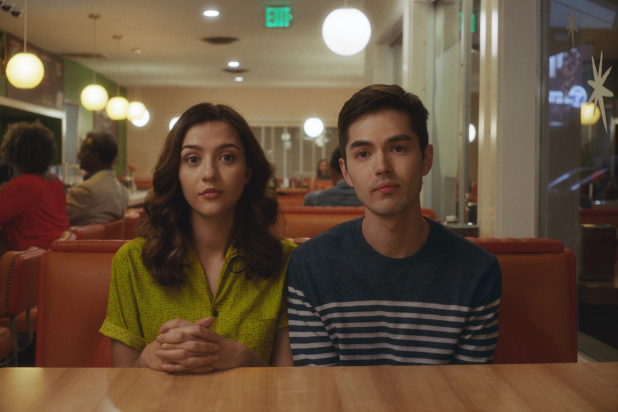 It was something I wanted to be conscious of. I wanted to be authentic to people with OCD. A lot of times, they don’t change, or they can’t change. So on one hand, you want Todd to have everything you want for him, that you feel like everyone should have. At the same time, I didn’t want it to feel like this force-fed Hollywood ending. I wanted it to be something that real people who have OCD or who have other intimacy issues that they’re working through can see that he’s on a journey, as well as Rory. I hope people like the character. I hope he’s at least entertaining to watch in the same way that Woody Allen is interesting to watch. He’s not always likable, but he’s so specific. I think ultimately the characters are kind of pretentious and in their own bubbles. I think that’s true of all the other characters too. I’m not putting them on a pedestal. But they’re on the same vibration with each other, which is why they’re so compatible.

The other major element here is the cruelty of Los Angeles, how isolating and lonely it is, and how the entertainment business just erodes everyone. Without going into too much detail, how much of Rory’s story based on your own?

I think it’s always a struggle between feeling like you’re a smart person and could do so many things with your life, and people tell you if you can do anything besides acting, go do that. Thankfully for me, I can do other things like writing and directing. But I think for Rory—and I feel this too—she felt she had such a responsibility. She felt like the world is crumbling, the world needs so much help. Acting can be such a vain exercise, and if you’re doing something that is creatively unfulfilling, then it can feel really pointless. You hope to get to where you want to be eventually. Perseverance will help you get to where you want to be. But anyone who’s a creative freelancer can attest to that kind of fork in the road: maybe I should have done this instead. For Rory, she found that it wasn’t worth it.

The central question raised by their relationship is are these two people in love with each other, or are they just that lonely? That also raises a philosophical question: is it possible for two to be in love or a romantic relationship, but not want to have sex?

I do believe that. They joke about 65% of married couples stop having sex after ten years. And that’s true. A lot of marriages aren’t based on sexual chemistry. If you look at the history of the world, the idea of modern, romantic love is a very new, modern, Western concept. Arranged marriages are much more successful. I don’t want to speak for arranged marriages on how much sex they’re having, but I would imagine it’s not the same sort of image that we see plastered all over films and television. I wanted too to respect the asexual community. They’re extremely underrepresented in all media. Don’t get me wrong, I like watching beautiful people have sex. I think it’s great. But, I can see from the point of view of someone on the asexual spectrum that it can feel very overwhelming and isolating.

This is an extremely dialogue-heavy film, reminiscent of Allen or Howard Hawkes. Everything has a very specific rhythm to it. At times, the dialogue is almost like music. What strategies as director did you take to make sure it felt cinematic, rather than theatrical or like a stand-up comedy bit? Did you rehearse?

I do sort of envision it as a modern screwball comedy. Unfortunately, we had a very limited time for rehearsal. The nice thing was pretty much everyone in the main cast auditioned so I could see they inherently understood the dialogue and rhythm, which was why I cast them. Katie & I, I traveled to Vancouver where she’s based so we could rehearse a couple days. Because I come from a theatre background, and because it is so dialogue-heavy, people did have concerns that it read more like a play than a film. So that was a challenge for myself as a director—to make sure it didn’t feel like a filmed version of a stage play. I wanted it to feel like we were taking advantage of cinema as a medium. So that was something I really wanted to do: hearken back to older films like Casablanca where they would really sit and allow two actors to talk. You don’t want to cut away from Bergman or Bogart—they’d hold these long two shots. So there were scenes where we felt like that was necessary, but then there were other scenes where we took a more modern spin on it with lots of quick cuts, very Edgar Wright-esque [director of Baby Driver]. In some ways it’s very ADHD, the editing, and other times, we wanted to let it breathe.

What are your ambitions after this? Writing? Directing? Acting?

I have a couple scripts I’m excited about. I’m just looking for the right partners, producers. I learned so much through this process about finding the right people so it doesn’t just sit on the shelf.

Straight Up plays July 23 & 24 at Outfest in Los Angeles. The film is currently seeking distribution.