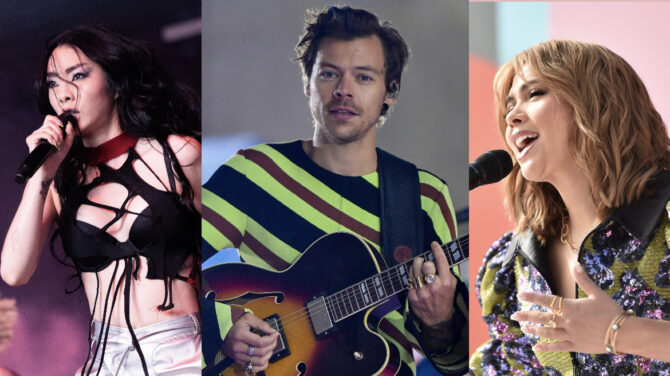 Congratulations sailor, you made it to Friday! This week has honestly been a refresher; we’ve got a whole bevy of queer films to look forward to, and we may finally hear the end of Madison Cawthorn. Now the weekend is upon us, and that means another chance to cut loose to the hottest hits of today–and we literally mean today. From the lightest of disco jams to a country pop shredder, welcome to the weekly bop roundup…

“This Hell” by Rina Sawayama

In a sentiment that seems to be on the rise in the community (think Lil Nas X‘s “Montero” video), Rina is ready to sashay straight into hell with a switch in her step. Ever the genre-bender, her turn to country pop is somehow the perfect soundtrack for a lively shuffle down into oblivion. “The Devil’s Wearing Prada” is an especially gay touch, something for her fans to shout along with in the refrain. This track should be perfect for blasting in the faces of cross-waving Pride protesters this Summer.

Canada’s Drag Race alum Lemon became an instantly hot commodity after her verse on Priyanka’s “Come Through” took social media by storm, and she’s keeping her legacy alive and well on this sugary club track. That’s not to say she runs away with it. Lagoona Bloo’s singing chops are understated but effective, and after her time in girl group Stephanie’s Child alongside her sisters Jan and Rosé, she doesn’t need to prove anything. On top of how fun this collab is, it’s just refreshing when a Drag Race alum puts out a song that’s genuinely good.

“For The Girls” by Hayley Kiyoko

Oh, so it’s SUMMER summer. The lowkey bass-grooving of the verse into the booming of the 808s under the chorus are sure to get your feet moving. The hype chant of “Summer’s for the girls/the girls who like girls” in the refrain is perfection, and her calls to “take a dip, join the fun” have us thinking she just might mean more than the pool. Put this all together with the lesbian Bachelorette-style music video and you’ve got a sapphic Summer hit.

Listen. We get it. He’s probably not. But Harry’s House has been one of the most anticipated releases of the year, and to say that “Late Night Talking” doesn’t absolutely groove would be a lie. The album as a whole is as sonically mixed as some of his little gender non-conforming outfits, but the boogie is infectious on this song. It feels odd to think that this is probably an ode to Olivia Wilde, but the celebrity lore does add a nice extra layer to the whole thing. And you know what? Best of luck to them!

“Dance (End of the World)” by mxmtoon

If Rina’s got us dancing into hell, mxmtoon has us grooving through the apocalypse first. This may be the bedroom pop lite version of a disco track, but with fun little bites like this to pad out the real disco renaissance leaders like Alex Newell and Michaela Jae, the genre might just make it back to life. This is one of the most upbeat songs on the rising album, but the entire work has a more danceable tune than she’s ever had before, even on the track actually titled “sad disco”. It’s coming back, we swear!

These are our top picks for the week! With one more Friday of music drops left before Pride month, we can’t wait to see what’s coming to finish out the rainbow playlists. See you back here next week for another bop roundup!