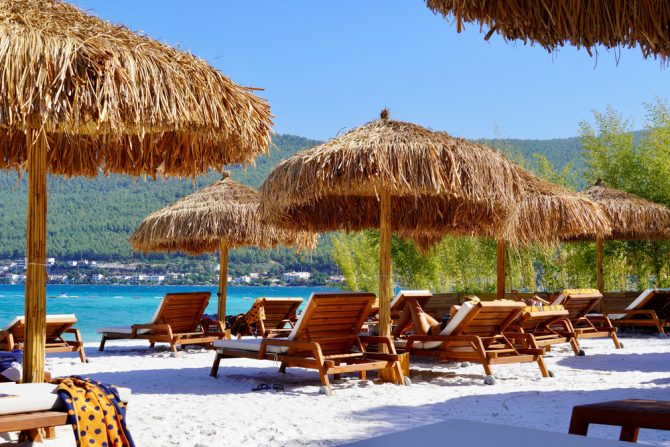 Hey, guys! Are you thinking about traveling to Turkey? Well, don’t bother booking a room at the Lujo Hotel because you’re not welcome. But they swear they’re not antigay! They’re just anti-gay men. Or something.

According to the travel blog One Mile at a Time, the pricey resort in the popular town of Bodrum will only rent rooms to men if they’re traveling with women. No single guys or gay couples allowed! No exceptions!

When a man named Denis recently tried booking a room, he received a message saying that doing so was against hotel policy.

“Reserving a room for an individual male guest is not possible,” the response read. “In case of reservation, the hotel reserves the right to cancel unconditionally.”

When Denis wrote back to clarify he was actually booking the room from himself and another man, the hotel responded by saying that was definitely not allowed because guys cause too many problems by “partying too hard.”

After hearing Denis’s story, One Mile at a Time contacted the hotel to confirm the outrageous policy.

The hotel replied by saying that it offers an “unparalleled” vacation experience “surrounded by beautiful nature with contemporary design and exceptional luxury, business, and lifestyle services” but “unfortunately, we don’t accept two men staying in the same room. Stay safe and take care!”

Adding a layer of absurdity to the whole thing is that its website encourages excessive partying, sex, and hedonism… so long as it’s happening between a man and a woman.

The site tells guests that after they’re done clubbing for the night they can “continue partying at your own terrace and bathtub.” It also brags about how rooms come equipped with a “Tantra Sofa” that “enables you to try sensual positions to take your love life to a whole new level.”

The hotel also has a pole dancing studio that offers private lessons for people who want to “try new moves and experiment with your partner.” And it offers private dancers and DJs for guests who want exclusive shows in their hotel rooms.

Since the story broke, the hotel appears to have updated its website to include a rainbow sticker that says “Everyone is welcome here.” But there’s still a catch. Because according to the site, “everyone” only appears to be welcome at the hotel’s pool and bar. Evidently, rooms are for straight people only.

Queerty reached out to Lujo Hotel for comment and clarification but did not receive a response.