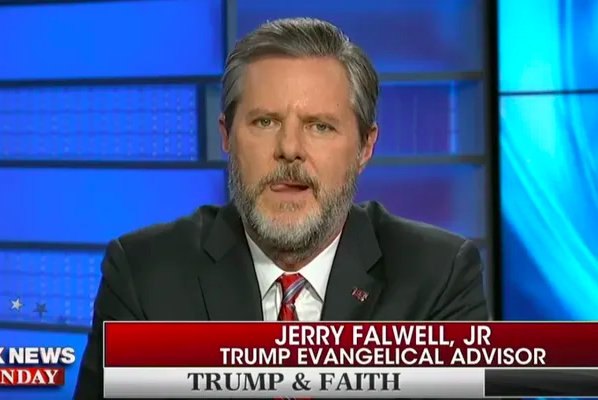 They say the truth always finds a way of revealing itself, and it looks as though that’s what’s happened with the never-ending Jerry Falwell Jr. pool boy x-rated photos scandal that broke last year.

Quick backstory: In May 2019, reports of an illicit relationship between Jerry Falwell Jr., his wife, Becki, and their 20-something-year-old pool boy, Giancarlo Granda, who they met on vacation at a hotel, surfaced, along with whispers about naughty photographs and blackmail.

At the time, the Falwells denied everything. Granda also played dumb. Now, over a year later, it turns out the whole thing was true. Go figure.

In an exclusive statement published by the Washington Examiner, Falwell shares his side of exactly what happened:

During a vacation over eight years ago, Becki and I met an ambitious young man who was working at our hotel and was saving up his money to go to school. We encouraged him to pursue an education and a career and we were impressed by his initiative in suggesting a local real estate opportunity. My family members eventually made an investment in a local property, included him in the deal because he could play an active role in managing it, and became close with him and his family.

Shortly thereafter, Becki had an inappropriate personal relationship with this person, something in which I was not involved – it was nonetheless very upsetting to learn about. After I learned this, I lost 80 pounds and people who saw me regularly thought that I was physically unwell, when in reality I was just balancing how to be most supportive of Becki, who I love, while also reflecting and praying about whether there were ways I could have been more supportive of her and given her proper attention.

Did you catch that folks?

An affair did, indeed, happen, just like everyone suspected. But it wasn’t Jerry who was boinking the pool boy. It was Becki.

While we tried to distance ourselves from him over time, he unfortunately became increasingly angry and aggressive. Eventually, he began threatening to publicly reveal this secret relationship with Becki and to deliberately embarrass my wife, family, and Liberty University unless we agreed to pay him substantial monies.

Even years after the improper relationship had ended, this person continued to be aggressive with Becki and me in a variety of ways. We finally decided that we had to further withdraw completely from him, which resulted in him stepping up his threats to share more outrageous and fabricate claims about us (under the guise of that business entity).

He clearly moved forward with this plan through a specific member of the media who has continued to badger us, as well as other members of the media, regarding the false claims about the nature of the relationship based on the individual’s misrepresentations.

Over the course of the last few months this person’s behavior has reached a level that we have decided the only way to stop this predatory behavior is to go public.

So Becki hooked up, er, had an “improper relationship” with the pool boy. Afterwards, he tried blackmailing the Falwells. They tried distancing themselves from him, but he wouldn’t leave them alone. And now here we are.

Of course, this is all according to Jerry Falwell Jr., who isn’t exactly known for being the most upstanding, truthful, or reliable source.

The pool boy insists the blackmail story is false. In a statement to the Washington Examiner, he says “any allegation of extortion is false, defamatory and belied by clear documentary evidence.”

Earlier this month, Falwell was placed on “an indefinite leave of absence” as the president of Liberty University after he posted a picture of himself with a woman who is not Becki, both with their pants undone, partying on a yacht.

Shortly after that, video taken at the boat party leaked online.

Two days before publishing his statement in the Washington Examiner, Liberty University’s board announced that a decision “whether or not to retain Falwell as President has not yet been made” and said it was requesting “prayer and patience” as they consulted with God on whether Falwell should be allowed back at the university.

Related: Liberty University students are breaking their silence about how creepy Jerry Falwell Jr. truly is