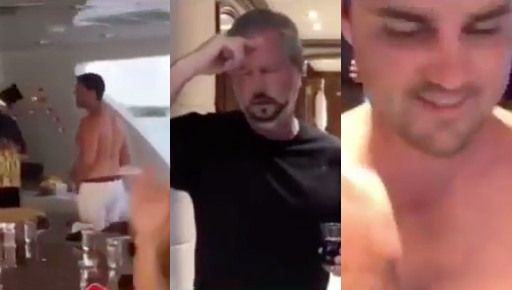 Hey, remember that weird picture of Jerry Falwell Jr. with his pants open that was circulating on social media earlier this week? Well, now there’s a video to go along with it!

A little backstory: For no apparent reason, the Liberty University President tweeted a photo of himself this week on a yacht with his fly unzipped and his pants wide open. Beside him was a woman, not his wife, also with her pants wide open.

Politico reports that the woman’s name is Kathleen Stone and her Facebook page lists Liberty University as her employer. The photo was purportedly taken during a costume party on a yacht last weekend.

The image was shared across Falwell’s social media platforms, but was only up for a few minutes before he deleted it, though not before a screenshot was taken and widely circulated across the internet.

Now, video from the costume party has also surfaced and it offers a truly bizarre glimpse into what the staff at Liberty University does in their free time.

The video is supposed to be a parody intro to the show Trailer Park Boys, highlighting each of the partygoers dressed up as a different character, with Falwell as “Julian.”

It shows inebriated guests getting drunk, dancing, lounging around, and pretending to smoke cigarettes. In the background of one shot are a bunch of empty red Solo cups one might find at a college house party.

All of this is deeply ironic given that Liberty University prohibits alcohol consumption for all students on or off campus.

In an interview with a local radio station in Lynchburg, Virginia, Falwell explained the story behind the viral photo, saying the woman he is pictured beside is his “wife’s assistant,” adding, “She’s a sweetheart and I should never have put it up and embarrassed her.”

“We were on vacation. And, anyway, long story short it was just in good fun. That’s it.”

He added, “I’ve apologized to everybody. And I’ve promised my kids I’m going to try to be–I’m gonna try to be a good boy from here on out.”

Watch the truly, truly bizarre video below. We should warn you that it cannot be unseen.