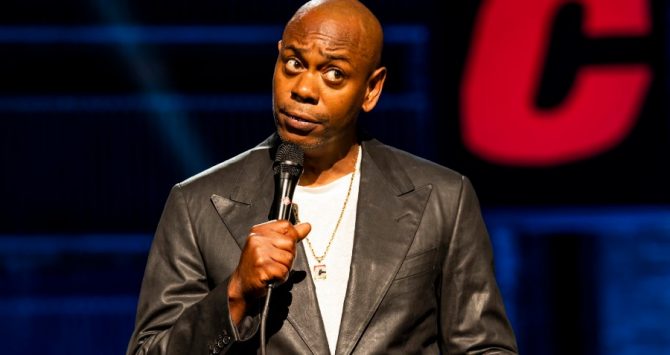 Dave Chappelle is out of new material.

Newly posted audio from the Netflix is a Joke Festival at the Hollywood Bowl in late April finds Chappelle clinging to the same tired, queerphobic comedy that has kept him recently relevant.

Chappelle blasted Lil Nas X as a “promiscuous f*g,” called Lia Thomas a man, and compared transness to him “identifying as Chinese” before putting on a heavy stereotypical East Asian accent.

Even after speaking on Lil Nas X as one of the “promiscuous f*gs in Hollywood,” he somehow expected the crowd to believe him later on he said he respects Lil Nas X because he’s “busy being himself.”

In another part of the show, Chappelle returned to his trademark transphobia, this time targeting Lia Thomas specifically (or, as he referred to her, “this trans swimming b*tch”).

A large portion of the country, including a number of legislators, wish that trans people did not exist and plan to do their best to make it so, and Chappelle is out here laughing with those folks in front of thousands and thousands of people.

He asserts each time that he launches a new attack against the trans community that he “has nothing against them,” but is clearly content with contributing to the culture that would see them eradicated.

In 2006, Chappelle left his eponymous sketch show, walking away from a $50 million offer because he felt that people were “laughing at the wrong thing” in the show’s racialized humor. There was a point in Chappelle’s life where he would rather walk away from millions of dollars than lend his voice to something that degraded a disadvantaged culture.

Clearly, that time is long past.

baring it all
12 comments

baring it all
12 comments