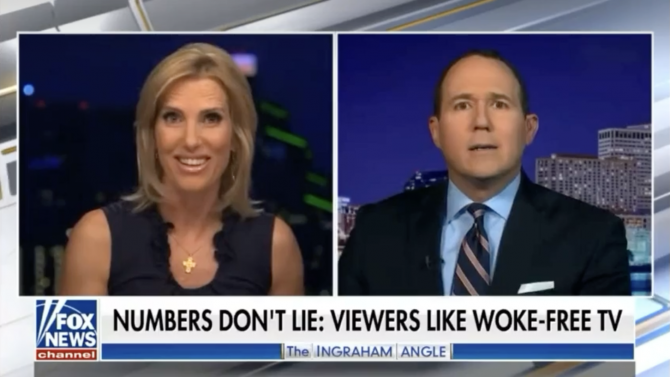 Laura Ingraham is definitely being parodied on SNL this weekend.

The Fox News propagandist is currently the laughingstock of Twitter after last night’s episode of The Ingraham Angle when she got into a screaming match with a guest over the Netflix show You, which she mistakenly thought was about her.

Ingraham opened Monday night’s show in usual fashion: By slamming President Biden’s “Team of Incompetents” and questioning whether he’s even capable of doing his job as president.

“America is truly in danger,” she said, “under a president who is physically and mentally deteriorating before our eyes … real chaos is unfolding.”

Little did she know, the chaos was just beginning.

Related: Laura Ingraham defends Dave Chappelle’s transphobia, even though he called her a “c*nt”

Later in the episode, Ingraham had her old buddy Raymond Arroyo on to bitch about how scripted TV shows cater too much to leftwing viewers, particularly around topics like vaccines and COVID-19.

At one point, Arroyo brought up the hugely popular Netflix show, saying, “I was watching an episode of You when measles came up.” Ingraham quickly interrupted to ask, “Wait, wait, wait. When did I mention measles?”

“What was on me?” a confused Ingraham answered. “What are you talking about?”

Things only got worse from there. Because Ingraham quickly started to get annoyed with her guest. Like, really annoyed.

“We never did a measles and vaccine episode!” she quipped. “Is this a joke?”

Then Ingraham, still not understanding that there’s a show on Netflix called You and that Arroyo wasn’t referring to her own show, started shouting about the measles and calling everything stupid.

“Raymond! I’ve never had measles! What are you talking about? This is stupid!”

Arroyo tried to explain: “It was an episode of a show, Laura.”

The absurd exchange continued for a while longer before both trolls eventually gave up and Arroyo said he was moving on to talk about Adele instead.

HAHAHAHAHAHA Laura Ingraham @IngrahamAngle had a SNL skit night on her show. You can make this shit up pic.twitter.com/RNfyXC4FJu

Some believe the whole thing was scripted and that it wasn’t intended to be taken seriously. Others beg to differ.

Y'all if you ever thought the folks over at Fox News couldn't get any dumber, Laura Ingraham just said hold my beer. #YouNetflix #Netflix #FoxNews pic.twitter.com/8oLiCbb51b

It was obviously a scripted bit. Geesh. Lighten up!

I thought surely this CANNOT be real…until she said “there’s a show called Laura Ingraham on Netflix”. I can’t. 🤦‍♀️😂😂😂

That guy: "@IngrahamAngle, YOU are a soul-selling grifter peddling racism and deadly disinformation."

.@IngrahamAngle: "Now, THAT I understand."

Part of me – having watched this four times now and LOL-ed each time – feels like he’s pranking Ingraham, I mean, he waits 53 seconds to say, “There’s a show called ‘You’ on Netflix,” but then again, even after he says that, she says, “A show called Laura Ingraham?”
😂😂😂😂😂😂

The Laura Ingraham thing people are sharing was obviously scripted. No big problem in people enjoying it, but it's the type of stuff her show normally does.

Laura Ingraham is an American patriot.

folks i regret to inform u that the laura ingraham thing is a bit, just like everything else on her show

If stupid were magnetic, Laura Ingraham wouldn't be able to walk past a refrigerator without sticking to the door.