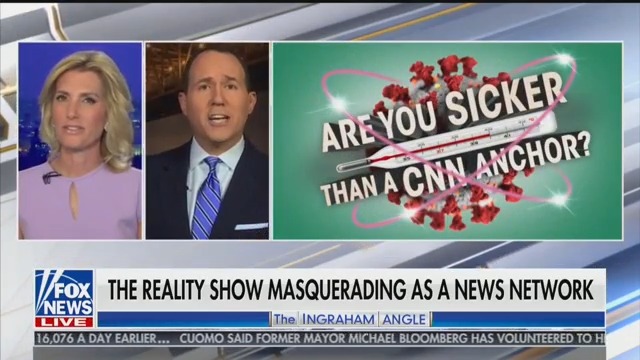 We didn’t think it was possible, but Fox News anchor Laura Ingraham may have reached a new low on last night’s episode of The Ingraham Angle.

CNN anchors Chris Cuomo, Brooke Baldwin, and Richard Quest have all tested positive for coronavirus, with both Cuomo and Baldwin documenting their illnesses and recoveries on their shows.

“Throughout the lockdown, CNN anchors seem to have increasingly become the story,” Ingraham said.

To which, Arroyo replied, “Laura, the first rule of journalism is don’t inject yourself into the story. But there seems to be a deliberate attempt to graft a slew of CNN anchors onto this COVID crisis.”

He continued, “A number of them have contracted the virus and emoted their personal experiences. It almost appears they’ve launched a series of new reality shows. You could call this one ‘Are You Sicker Than a CNN Anchor?’”

Pls boycot #COVIDIOTS Laura Ingraham, Raymond Arroyo and the graphic designer at Fox (Fox, which is projecting its own ‘masquerading as a news network’…):

Shame on you, for belittling & making fun of CNN ppl having Covid19, making a graphic “Are you SICKER than a CNN anchor?” pic.twitter.com/WXuSFdmNYC

Ingraham nodded along as Arroyo went on to call Cuomo and Baldwin’s reporting on the pandemic “disturbing” and accused them of losing “all perspective.”

“To become the story is a big problem here,” he said, “and CNN really should tamp down their personal stories. It’s too much.”

“I don’t really get it,” Ingraham agreed. “Is that the news?”

Hmmm. It can be any less newsworthy than bashing news anchors from other networks. But what do we know?

Things got especially ugly when the duo started trash talking Anderson Cooper for a 10-second joke he made about cutting his own hair on a recent episode of Anderson Cooper 360°.

“I saw that. It was all about his quarantine grooming. You might call the show, ‘Vanderbilt Rules,’” Ingraham said, in a reference to Cooper’s mother, Gloria Vanderbilt, who recently died. “This is like Big Brother or something.”

This segment making fun of CNN anchors with Coronavirus seems like it’s going to backfire pic.twitter.com/3hZ3HzWKZN

That’s when Arroyo started bashing Cuomo again, saying his show should be renamed “The Real House Husbands of the Hamptons” after he spent two weeks quarantined in his basement to protect his family from getting sick.

“If this were real Laura, it would be fine, but it’s not,” Arroyo said. “This was feigned. This was a feigned recovery.”

“He was out bicycling while he pretended to be in the basement. Don’t advertise your quarantine and moralize about it with your brother every night, saying you’re going to kill people [by going out], when you’re doing it. It’s outrageous.”