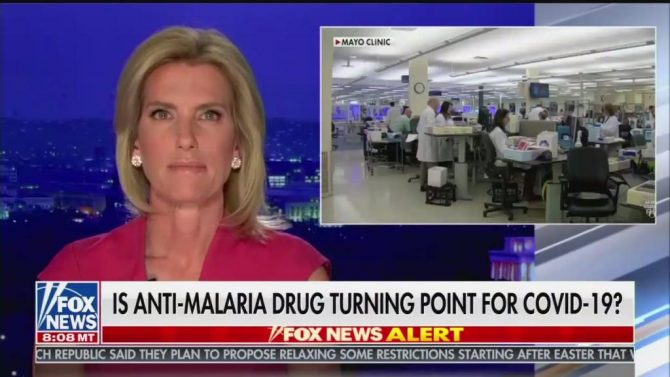 Something stinks about Laura Ingraham. And we’re not just talking about her antigay politics or her homophobic personal views about LGBTQ people.

And she’s doing it at the highest level, too.

Several media outlets are reporting that Ingraham recently had a secret closed-door meeting with Donald Trump to convince him to promote the controversial drug hydroxychloroquine as a potential cure to COVID-19.

Then last month, she accused reporters of being “panic pushers” stirring up “mass hysteria” about the virus for the sheer fun of it, going so fas to say “some of them are enjoying this.”

Then last Friday, she–along with what she calls her “medicine cabinet,” cardiologist Ramin Oskoui and infectious disease specialist Stephen Smith–had a hush-hush meeting with Donald Trump and FDA Commissioner Stephen Hahn that nobody was supposed to know about.

Related: Trump to be referred to International Criminal Court for crimes against humanity

During their secret sit-down, Ingraham endeavored to convince Trump to endorse the highly controversial malaria drug hydroxychloroquine as a potential cure for COVID-19. (Ingraham, who does not have a medical degree, has described it as working “like Lazarus, up from the grave,” whatever the hell that means.)

Ingraham has been promoting the drug as a potential treatment to coronavirus on her Fox News show and has referred to the two aforementioned doctors as her “medicine cabinet.” During the meeting, Smith said he showed Trump documents and “a detailed presentation” about hydroxychloroquine’s benefits “based on his own experiences and studies” and its uses in hospitals.

White House officials who spoke anonymously with The Post to candidly comment on the meeting said it “appeared to be an effort to press Trump to ratchet up his public support for the drug.” Trump reportedly “listened intently” and left “seemingly determined” to push for its wider use.

Two days later, during Trump’s daily televised press briefing on Sunday, he touted hydroxychloroquine as a “game changer” in the fight against coronavirus.

Never mind the fact the drug’s effectiveness has not been proven and is, in fact, the subject of fierce debate among medical experts. Or the fact that Dr. Anthony S. Fauci, the infectious disease expert on Trump’s coronavirus task force, has cautioned against using it. Or the fact that it has major side effects, including loosening of the skin and the inability to move the eyes.

Shortly after that, Trump ordered his coronavirus task force to rush-deliver the drug, which he has a financial stake in, to pharmacies and hospitals around the country.

The question, of course, is: Why is Laura Ingraham of all people leading this clandestine charge to promote hydroxychloroquine? It’s already known that Trump has investments in Sanofi, the company that manufactures Plaquenil, which is the brand-name of hydroxychloroquine. But how does she factor in?

Also, where did Trump find the time to meet up with a primetime cable news host during an ever-worsening pandemic? Surely he has more important things to do?