Not even two months after the chart-topping success of his last single, “MONTERO (Call Me By Your Name)”, Lil Nas X has released his latest track.

‘Sun Goes Down’ marks a change in tempo for the performer: it’s an emotive, heart-wrenching rap ballad that finds him reflecting upon his insecurities when younger.

It’s a track many of his LGBTQ fans will be able to relate to, or indeed anyone who has worried about fitting in or being accepted.

“Always thinking why my lips so big? Was I too dark? Can they sense my fears?” he sings. “These gay thoughts would always haunt me, I prayed God would take it from me, it’s hard for you when you’re fighting, and nobody knows it when you’re silent.”

In the chorus, he appears to contemplate suicide.

Related: He did it: Lil Nas X takes “song about gay sex” to top of Billboard Hot 100

In the accompanying music video, we see Lil Nas X singing to a younger version of himself, sweeping floors at a Taco Bell.

The younger version is then shown at High School, where he nervously shows up at Prom. Surrounded by opposite-sex couples slow dancing with one another, he retreats to a bathroom stall in tears. 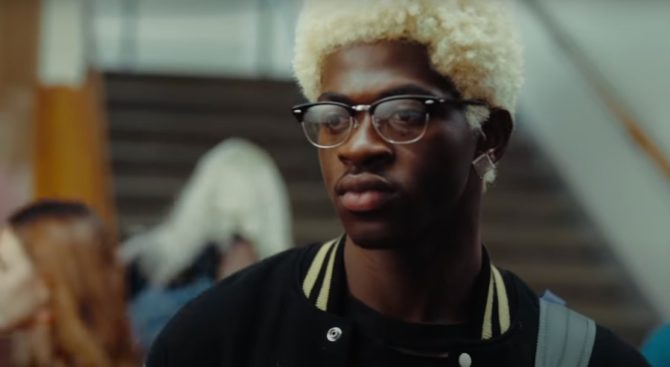 His older self gives him a pep talk, reassuring him there’s “much more to life than dying over your past mistakes, and people who threw dirt on your name.”

On Twitter, Lil Nas X said the song was “very important to me” and hoped his fans would love it. The overriding response was that they did.

Dammit I didn’t expect to tear up today.

You have done it again. I am bawling. This is everything and the fact that you’re able to be so vulnerable in your music…your music is helping so many LGBTQ+ people feel less alone including myself. Thank you Nas. We love you and your music🤍

After watching this video of you my respect has gone even higher for you, life was hard for you back then and you needed to hide it. I’m happy you were able to get through all of those hardships in your life to make it where you are today, you completely deserve it❤️

Listening to Sun Goes Down by Lil Nas X pic.twitter.com/kpPb9NeTgB

Oh, and Taco Bell also appreciated featuring in the video!

Related: Lil Nas X says he worried ‘Call Me By Your Name’ might alienate straight fans