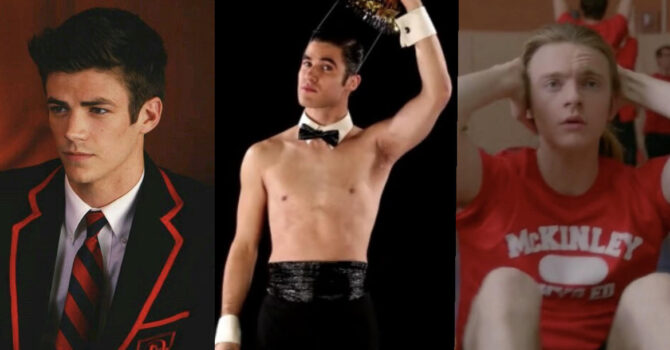 Can you believe it’s been 13 years since Glee premiered? It seems like just yesterday “Don’t Stop Believing (Glee Cast Version)” came to storm the iTunes store and take over the young gay consciousness. As progressive as the show was for its time in regards to queer rights, Ryan Murphy sure did his fair share of casting straight men in gay roles. In honor of Glee’s anniversary, here are our picks for the show’s top five gay-for-pay performances…

The fact that eight-time Grammy winner Finneas O’Connell, brother and collaborator of noted Gleek Billie Eilish, was a regular member of the Glee club in its last season will never cease to be hilarious. In addition to adding vocals to Glee covers of songs like Clean Bandit’s “Rather Be” and Echosmith’s “Cool Kids”, Finneas’ stint as the scarf-clad, ukelele strumming Alistair included a romantic plot with fellow New Directions member Spencer. Spencer was the football-star meathead to Alistair’s sensitive artist, and their chaste kiss in the choir room made for a picture we hope Finneas has been made to sign at a meet-and-greet at least once.

Karofsky might not have been the most likeable character, but by god if Max Adler didn’t put his entire heart into this gay-for-pay role. The closeted homophobic jock is as tired a trope as any employed in Glee’s run, but Karosky might be the archetype’s defining character. He loved, he cried, he slammed that little twink Kurt into every locker in the school, and still his emotional scenes set to “Cough Syrup (Glee Cast Version)” had us all ready to weep.

Jeff Goldblum as a theatrical homosexual dad to Rachel Berry is such an inspired turn that its almost surprising it made it on the show. His old married couple banter with Broadway’s Brian Stokes Mitchell helped make the third season of Glee worth watching. If nothing else, the fact that they look completely different from the picture of Rachel’s dads we see in her locker in episode one (as if she had stunt cast her own dads halfway through the series) adds a strong camp factor to the whole situation.

Grant Gustin’s evil performing arts gay portrayal as Sebastian was so convincing that he got the full “wait, he’s not gay?” surprise treatment online. Whether it was blinding Blaine with a slushie, bear-shaming Karofsky to the edge, or threatening the Glee club with photoshopped nudes, Grant added an undeniable flair to each of his appearances. There are some implications to Ryan Murphy making him so evil and also the face of active gay sexuality on the show, but such is the nature of Glee.

If Grant Gustin got the “wait, he’s not gay?” reaction, Darren Criss got the full “no, he’s definitely gay. Right?” tidal wave following his first appearance on Glee. Ever the ally, Darren rode that gay-for-pay horse all the way to an Emmy for his portrayal of Andrew Cunanan in American Crime Story before finally promising to hang up his saddle. As important as it is for queer actors to be allowed queer roles, we might not protest too terribly much if Darren decided to make out with a few more guys on screen. You know, for old time’s sake.