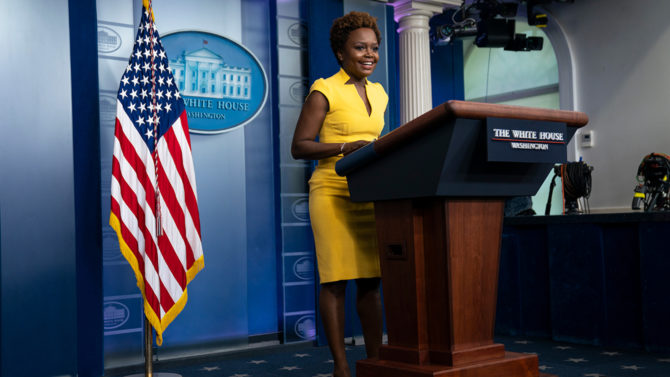 The MAGAverse has been trolling Karine Jean-Pierre all week after she was photographed wearing a dress that looks very similar to one made in China by former first daughter Ivanka Trump‘s now-defunct fashion line.

Jean-Pierre, who took over as White House press secretary last week, making her the first Black person and the first openly LGBTQ person to ever have the role, was seen wearing the garment in a photo posted to Twitter by White House press assistant Megha Bhattacharya.

“Press Secretary Karine Jean-Pierre has a nice ring to it,” Bhattacharya tweeted, along with the picture.

Press Secretary Karine Jean-Pierre has a nice ring to it pic.twitter.com/TcFbNcajYo

It’s unclear whether the dress is actually one of Ivanka’s designs, but it didn’t take long for pro-Trump Twitter trolls to pounce anyway, branding Jean-Pierre’s look “hysterical” and “priceless,” and calling it “ironic” that she would wear something designed by the ex-president’s daughter.

Here are some of their reactions…

Turns out she’s way under-qualified for the role.

Even Don Jr. joined the pile-on…

Honestly, Jean-Pierre’s fashion faux pas (if you can even call it that) isn’t quite the level of scandal as, say, ex-FLOTUS Melania Trump traveling to the U.S./Mexico border to visit children being held in cages by her husband’s administration and wearing a jacket that reads “I really don’t care, do u?” 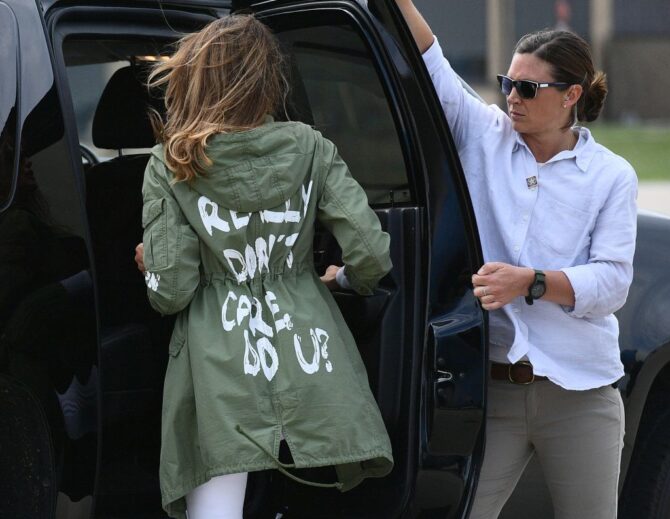 Or as tacky as, say, Melania auctioning a hat she wore during an official White House state visit in 2018 for $250,000 on her personal website.

Like we said, we don’t know whether Jean-Pierre’s dress really is a design by Ivanka Trump. It could be. Or it could be the original dress Ivanka knocked off. Regardless, the whole thing is pretty dumb.

The former first daughter shut down her fashion line in 2018.

Now, here’s how people responded to Don Jr.’s tweet about Jean-Pierre possibly wearing one of his baby sister’s designs…

The last time I saw that was for $7.99 on the Ross clearance rack about four years ago.

Last time I saw an Ivanka Trump dress that I liked it was on the 1/2 price rack at my local Kohls.

Those Indonesian kids do nice work.

You can always get this copy of a Michael Kors designs

So the new press secretary shops at Goodwill. She’s fiscally frugal. Good for her!

Isn’t this included in your family’s licensing agreement with China.

The Press Secretary might be wearing an original. It wasn’t unusual or unheard of that Ivanka ripped off other real designers.

Business not so good that you have to “flag” her??