Queer athletes have been using their platforms for years to boost the fight for visibility and equality. Think of Renée Richards, the trans pro tennis player who came out way back in the ’70s. Think of the tennis greats Martina Navratilova and Billy Jean King who came out shortly thereafter, and remain forces for good to this day.

Then there’s former NFLer Dave Kopay who came out in 1975, just a few years after the first pride marches. In the ’80s Glenn Burke, the young black baseball star, talked about being forced out of the game simply for being honest about who he is. The list of athletes who did the right thing goes on and on to this day, despite the fact that there have never been openly gay players in the four major American pro leagues, a lasting shame.

But there is reason for hope. A new generation of athletes are coming out as early as high school and college. For a world thirsting for representation and for a message of equality in a difficult time of violence and protest, these five athletes and ex-athletes have managed to impress both for their athletic prowess and for their courage in speaking up on issues ranging from Black Lives Matter to queer erasure in pro sports–despite the dangers that might entail in 2020 America. 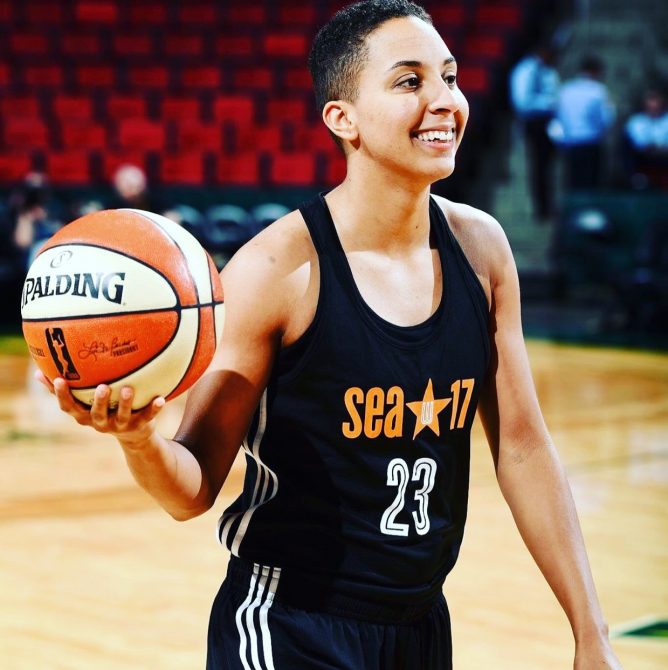 If any single person makes us optimistic about the future of equality it’s the remarkable Layshia Clarendon.

The point guard for the New York Liberty of the WNBA is not just a star on the court, where she has dominated since leading the UC Berkeley Bears to 28–2 record in 2013, earning the team’s first Final Four birth. (The Bears lost in the national semifinals to Louisville.)

Unlike many athletes who mysteriously lose their voice after signing fat contracts, Clarendon (selected number 8 in the 2013 draft by the Indiana Fever) only amplified hers, challenging her employers in a way that Colin Kaepernick would approve. The African-American lesbian spoke out when she feared that the franchise’s management was closeting LGBTQ fans under the rubric “Diversity Night” during pride month when in fact pride is a more confrontational statement about equality.

The WNBA has become more open in its embrace of queer fans and players since Clarendon raised her voice, at one point employing the league’s Twitter account to send messages of support to Mili Hernandez, an eight-year-old banned from a soccer game because her gender non-conforming haircut made a few parents uncomfortable.

The 28-year-old, who married Jessica Dolan in 2017, has turned her eloquent voice to supporting Black Lives Matter protests. That voice, at the intersection of female, queer and black, has never been more necessary this pride month.

Asked what pride means to her, Leyshia told Athletes for Hope:

So many of us have had to overcome being told to hide who we are by people we loved and respected. It’s not all rainbows and sunshine. Being a queer person still puts you at risk for violence, harassment, and bullying. It’s still difficult to navigate workplaces, religious spaces, and to find community. As a queer black woman, I live at the intersections of being a woman, being black and being gay. In society, we haven’t done a good job of integrating our fight for social justice to include the people who fall into multiple categories of marginalization. We have seen the queer community as a whole not stand up for issues affecting the black community and we have seen the black community not embrace their queer peers. I often ask myself, where do I fall in all of this? What side do I choose when both are at odds? Do I decide to just be queer today and black tomorrow?