When fashion retailer Abercrombie & Fitch revealed its 2020 ‘Face Your Fierce’ campaign last month – to promote its various ‘Fierce’ fragrances – much was written about the diversity of the models featured.

In a noted move away from A&F campaigns of yore, the line-up included a mixture of body shapes, gender identities and sexualities. Well-known LGBTQ faces included the athletes Megan Rapinoe and Gus Kenworthy.

But not everyone boasts a slim, athletic physique, and Abercrombie is now keen to promote itself as welcoming all, regardless of size. The campaign utilized body positivity advocate Halle Hathaway and plus-size male model, Michael McCauley.

For McCauley, to be asked to be featured in the campaign was a dream come true. The 29-year-old, who stands 6’1” and 260lbs, has only been professionally modeling for around 18 months.

“It was funny because when Sergio [his agent] called me, he said it’s for Abercrombie, and I laughed and asked, ‘Have they got the right Mike?’ because there’s another Mike at LA Models who’s perhaps a more traditional Abercrombie model. And he was like, “No, they definitely want you.”

McCauley’s modeling career began when he met the aforementioned Sergio of LA Models at a party. The agent and talent scout suggested he do a test shoot.

“The photos came back. I was signed, and I think within a few days I applied for my first job. Since then I’ve also signed with Options up in Portland. And I’m looking at some other ones internationally.”

McCauley grew up in Portland, Oregon. He now lives in Los Angeles, California. Modeling, at the moment, remains a sideline. His day job is working for a company involved with programmatic and mobile advertising. He talks via Skype from a hotel in New York City, frantically trying to iron a shirt before dashing off to a work meeting. He is also pursuing potential acting roles.

Before being signed, professional modeling was not something he’d ever considered.

“No! I never thought it was possible. I mean, let’s be real, there really aren’t guys like my size who are models. There’s only a handful.”

Related: Colton Haynes’ new Abercrombie photos aren’t half as hot as his others

The Abercrombie campaign is a sign of changing times. The brand is still best remembered for its campaigns from the 90s and 00s when it promoted a strict aesthetic for men of washboard abs and hairless, toned torsos.

In fact, back in 2006, the brand’s then CEO, Mike Jeffries, told Salon, “A lot of people don’t belong [in our clothes], and they can’t belong. Are we exclusionary? Absolutely. Those companies that are in trouble are trying to target everybody: young, old, fat, skinny. But then you become totally vanilla.”

“They haven’t had the best track record, you could say,” McCauley concedes, “but when I got to the set, the team there were just the nicest people.”

“That was never really the initial plan. We’d been shooting for the entire day and at the very end of the day, they had one last picture for me [to do].

“The photographer asked me if I’d be comfortable taking my shirt off for a couple of pictures, and I was like, ‘Absolutely, of course.’ I’d always had it in my head to do something a little old-school Abercrombie. I dreamed of an opportunity like this, so it was pretty unreal.

“My only stipulation was we have to cue to music. We needed some energy, so we put on a K-Pop standard, “DDU-DU DDU-DU” by BlackPink,” he laughs.

“I’ve seen tons of messages, DMs, people just so excited to see representation of guys like them in modeling. Especially in Abercrombie. I’ve had probably over 100 messages from people saying they’re, ‘going to go to Abercrombie to see you in the store’.”

Rewind to the 1990s and it was a very different story. McCauley remembers how his mom wouldn’t let him shop in A&F stores or own the brand’s catalogs. 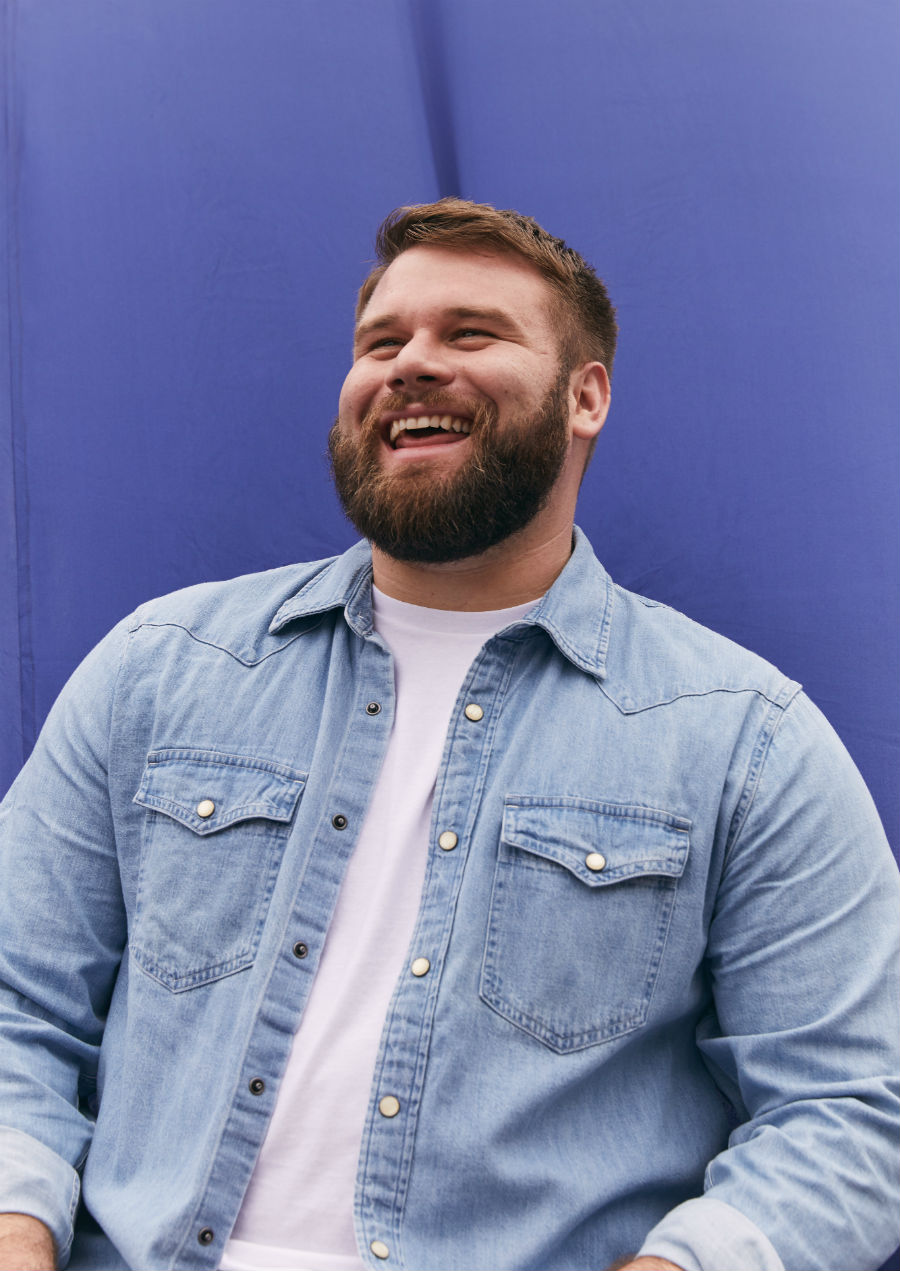 “They [the catalogs] were very suggestive and hypersexual,” he says. “So just thinking that I could have gone into the store and seen a guy like me, that it was OK to have your body like that, and that’s sexy too … that would have been a powerful message to me growing up.”

McCauley is gay. He says coming out to his parents as a teenager was relatively smooth: “They are super understanding and super loving.”

Encouraged by their support, he decided to come out to his whole high school during his senior year.

“I was supposed to help out with planning our diversity assembly, [and] in the back of my mind I’d been wanting to profile a gay person.”

Given then he was gay himself, and his parents had been OK with it, he soon realized he might have to do it himself.

“So in front of 2,000 kids, I came out to my entire high school at the assembly. I told my whole story and basically confronted the bullies right in front of their faces. I didn’t name names but kind of referenced people and some things that had happened.

“My mom had been very ‘I don’t know if this is a good idea?’, and my dad was like, ‘Yeah, you should do this,’ but when it all came out, it had a really good effect on our community and I never got any trouble for being gay again after that. No-one’s going to make fun of you for something that you’ve already put out there.”

Putting himself “out there” is intrinsic to McCauley’s new career path. He says friends and family are supportive of his modeling and other ambitions.

“They’re loving it. I think my mom was a little bit concerned at first … she’s always a little bit concerned. She’s a mother, right? She’s like, ‘Are you sure you want to take your shirt off? You look really nice in your clothes?’ But I think once the campaign came out, she got the messaging behind it. And the rest of my family and friends have really got the message.”

This picture sums up our relationship! @kellengeha and I just celebrated our anniversary! I can’t wait to travel the world together and eventually start a family together! I love waking up with you to your cute smiling face every morning excited for what’s to come next! I LOVE YOU!!! 🥰😍

Another pillar of support is his boyfriend, Kellen. They met on Tinder, and McCauley says they work a lot together.

“We travel a lot together. When you’re seeing stuff on Instagram, a lot of the photoshoots, he’s often behind the camera or he’s helping me with content and editing… even just driving to auditions and go-sees, because LA can be a parking nightmare. We’re definitely a team.”

Is McCauley now having to cope with thirsty DMs in his inbox?

“Honestly, like, there’s comments and people send messages,” he laughs, “I’m very flattered, but I just ignore. I don’t hook into it. I’m very much in love and very happy.”

The Abercrombie campaign is opening doors for McCauley and he’s looking forward to seeing where modeling might take him. If he can challenge people’s notions of beauty along the way, all the better.

“This year I really want to circle into more acting, but keep up the modeling, obviously. I’ve been loving, loving it, so definitely more modeling.”

No pill bottle or club will ever come close to the HIGH you get when you chase your dreams and do what you love. Thank you for helping me get where I am today and continuing to support me. Lots of love! 😁🧸💪🏼❤️

After our interview was published, some users on Twitter shared two social media postings reportedly posted by Michael McCauley when he lived in Portland, Oregon concerning the organization Black Lives Matter. One message, posted to Facebook and captured in a screenshot, said, “A group called ‘Black Lives Matter’ is blocking the street downtown and just made me late for a crucial meeting. Thank you for making your point – I’m glad your life matters more than mine.”

A second posting appeared to be a response to someone else’s message, instructing them to, “spend 10 minutes researching blm and come back and talk to me lol. It’s a group of extremists that don’t really represent the majority of the black community.”

The screenshots were undated. We have approached McCauley to comment on these postings.

McCauley posted a six-minute video to his Instagram yesterday to apologize over past social media postings that had come to light in the last few days. “I’m really, really sorry about all the comments that have come out recently from my past on Facebook,” he began. “And I just want you guys to know, I don’t agree with any of that stuff that I said.

“It’s really shocking to see myself say those kinds of things. And I want you guys to know that is no way the person I am today.”

He said that at the time had made the comments, people had reached out to challenge him about them, “and I was really able to educate myself on the Black Lives Matters movement, to realize just how wrong and privileged those comments are, and why they’re racist, why they’re not a joke. And I don’t in any way stand for things like that.

“With my platform, I try to just spread a good message, I try to show people that you can be the best you can be, and you can change yourself. I’ve changed and come so, so far since those things.

He went on to say he was reaching out to his local Black Lives Matter chapter.

“I really hope you guys can see past these comments and know I’m doing my part to make this right. I’m reaching out to my local Black Lives Matter chapter here in LA and I’m going to make sure I am educated as much as I possibly can on everything their movement is about, and if there is any way I can make this right and apologize directly to them, and potentially use my platform to make sure that other people don’t think this kind of language is OK, and understand why what I said is so offensive, and so hurtful and racist … because that’s not the world I want to live in and I don’t want to ever put that message out there.”