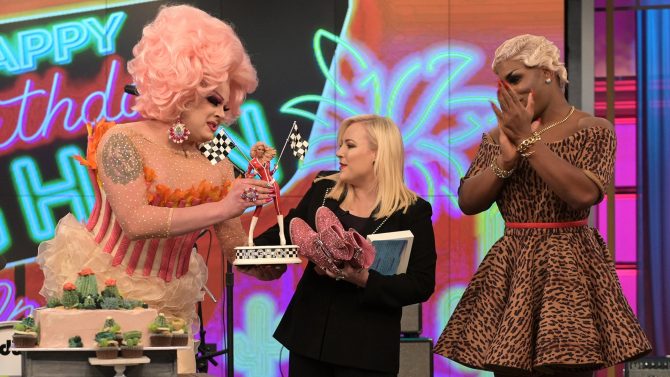 People are not happy with Monét X Change and Nina West appearing on The View this week to celebrate Meghan McCain’s 35th birthday.

The queens stopped by to surprise McCain, who is John McCain’s daughter (in case anyone forgot), with a birthday cake, a pair of autographed pink rhinestone cowboy boots, and a RuPaul’s Drag Race statuette.

“We thought it would only be appropriate if we made you an official Ru girl and gave you your very own,” Nina said as she presented McCain with the coveted statuette.

Though she likes to think of herself as to be an LGBTQ ally (which, for the record, she is not), McCain’s husband, Ben Domenech, is an outspoken homophobe and the co-founder and publisher of the extreme right-wing blog The Federalist, which regularly posts anti-LGBTQ op-eds and transphobic hit pieces.

And no matter how many times McCain uses the phrase “Yaaas, qween!” on The View, it cannot be ignored that, behind the scenes, she profits handsomely from the money Domenech makes from peddling hateful  anti-LGBTQ propaganda, or the fact that she’s publicly defended his work on numerous occasions.

Oh, and let’s not forget the fact that she aligns herself with a political party that, just three years ago, adopted an official party platform that formally opposed same-sex marriage, endorsed anti-sodomy laws, declared transgender people shouldn’t have access to public restrooms, and called pornography a danger to society.

As McCain was presented with her statuette and declared an official Ru girl, at least she had the decency to say “I’m not worthy!” And Twitter seemed to agree…

Meghan McCain is married to a guy who runs a website that regularly publishes anti-trans rhetoric that actively endangers several of the queens who have been on the show but ok https://t.co/qZAWSdg9VG

Nina West n Monét X Change doing a cutesy sketch with Meghan McCain on national TV, calling her a Ru Girl, n snapping back at fans for calling them on it? D i s a p p o i n t e d pic.twitter.com/jJlJJIh0Bo

Monet X Change is really out here saying “not all republicans” to defend Meghan McCain, as if she’s some type of Ana Navarro style “republican” lmfao. Meghan McCain is out here advocating for many policies that harm marginalized groups and goes to bed every night with a bigot!

Listening to Monet X Change trying to say that Meghan McCain is an LGBT ally on her insta… pic.twitter.com/zQ1E2fA3Vc

Monét X Change and Nina West were on the View w Meghan McCain, and Monet went to her IG story basically saying that McCain is an ally and we need to bridge the gap

Which I understand but, “Be nice until they like us” has never been an effective strategy

Yes it is relevant that Meghan McCain’s husband is a transphobe. If the idea is that she’s changing conservatives’ minds about LGBTQ people, she hasn’t even accomplished this task in her own home and clearly tolerates this.

But this isn’t the first time that Monet and Nina have appeared alongside McCain on The View. Last June, they sat down with her to discuss LGBTQ issues for Pride Month, after which there was a similar backlash.

Watch Meghan be declared an official Ru Girl below. Or don’t.