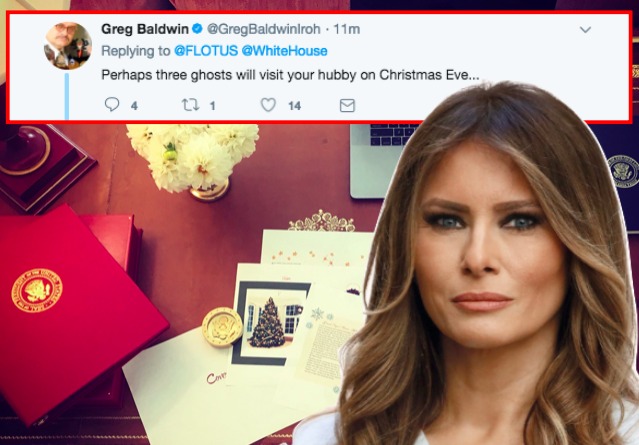 On Monday, the Trumps are set to receive their Christmas tree (we hear it’s being shipped from China). In the meantime, Melania has been busy making preparations for the impending yuletide season.

On Friday, the first lady tweeted her excitement for the holidays:

Unfortunately, not everyone is feeling her cheer…

Too bad middle America wont be able to afford a good Christmas. But as long as YOU are taken care of……

What is wrong with ppl, it's not even Thanksgiving yet.

I'm craving a world without #Trumps, a world devoted to kindness and peace, where elephants can roam without fear and turkeys in the White House know no pardon. @FLOTUS, @realDonaldTrump @IvankaTrump @DonaldJTrumpJr @EricTrump @LaraLeaTrump

Great! It reminds me of this!!! pic.twitter.com/jMkVHo3sJI

Who writes this stuff?

I imagine that this year's WH Xmas will look something like this. pic.twitter.com/YXPo2tFPtJ