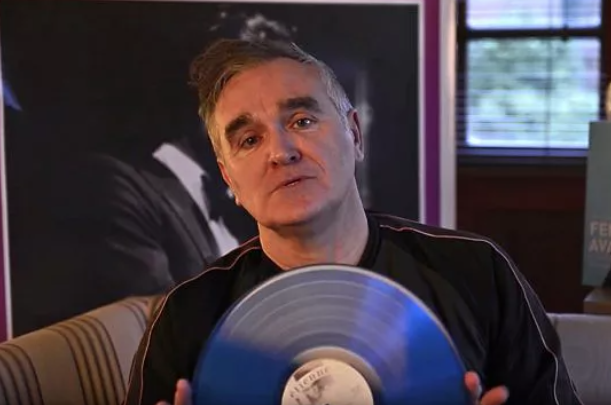 This just in: Morrissey has a chip on his shoulder.

OK, maybe not the most shocking news about a guy who’s referred to Lady Gaga as “fraudulent,” Madonna as “desperate womanhood,” and wished his former Smiths dummer Mike Joyce the “very very worst…for the rest of his life.” He’s also developed a bad reputation for making anti-immigrant statements, and has referred to Chinese people as a “subspecies.”

Now the singer has a message for another former bandmate. In an open letter published to his website, Morrissey told former Smiths guitarist Johnny Marr to stop talking about him in interviews.

Related: Morrissey says “everyone ultimately prefers their own race”

Morrissey insists the letter, published Jan. 25, is not a “rant or a hysterical bombast,” but then goes on to write:

“We haven’t known each other for 35 years — which is many lifetimes ago. When we met you and I were not successful. We both helped each other become what it is we are today. Can you not just leave it at that? Must you persistently, year after year, decade after decade, blame me for everything … from the 2007 Solomon Islands tsunami to the dribble on your grandma’s chin?”

Not included in the letter is exactly what Marr may have said to tick off his former collaborator, though the Guardian points to a recent interview Marr gave to Uncut Magazine while promoting a new solo album, Fever Dreams Pts 1-4.

“It won’t come as any surprise when I say that I’m really close with everyone I’ve worked with – except for the obvious one,” Marr said. “And that isn’t that much of a surprise because we’re so different, me and Morrissey.”

Apparently, that was enough to get Morrissey clacking away at his keyboard, writing, “The fact is: you don’t know me. You know nothing of my life, my intentions, my thoughts, my feelings… Yet you talk as if you were my personal psychiatrist with consistent and uninterrupted access to my instincts.”

Related: This Morrissey T-shirt is inadvisable on practically every level

“If I was, as you claim, such an eyesore monster, where exactly did this leave you Kidnapped? Mute? Chained? Abducted by cross-eyed extraterrestrials? It was YOU who played guitar on ‘Golden Lights’ — not me,” he wrote of the six years they spent making genre-defining music together.

Morrissey ended his letter writing, “Our period together was many lifetimes ago, and a lot of blood has streamed under the bridge since then. There comes a time when you must take responsibility for your own actions and your own career, with which I wish you good health to enjoy. Just stop using my name as clickbait. I have not ever attacked your solo work or your solo life, and I have openly applauded your genius during the days of Louder than Bombs and Strangeways, Here We Come, yet you have positioned yourself ever-ready as rent-a-quote whenever the press requires an ugly slant on something I half-said during the last glacial period as the Colorado River began to carve out the Grand Canyon. Please stop. It is 2022, not 1982.”

Marr issued a brief response on Twitter, writing: “An ‘open letter’ hasn’t really been a thing since 1953, It’s all ‘social media’ now. Even Donald J. Trump had that one down. Also, this fake news business…a bit 2021 yeah?”

Dear @officialmoz . An ‘open letter’ hasn’t really been a thing since 1953, It’s all ‘social media’ now. Even Donald J Trump had that one down. Also, this fake news business…a bit 2021 yeah ?#makingindiegreatagain

It’s clear who fans think won this round:

The difference between them is where the F word is placed in their names… people say “Johnny F***ing Marr” but “F***ing Morrissey”….. 🤣

Johnny Marr was the real genius behind The Smiths, not Morrissey. I’ll die on this hill.

Had the pleasure of interviewing Johnny Marr a few weeks ago and – newsflash – he didn't bring up Morrissey, I did. As journalists inevitably will. Johnny answered politely and intelligently, because he's a nice fella, but I'm sure he'd rather be talking about his new album.

As if Morrissey weren't bad enough – who on *earth* would post an open letter using this typeface? pic.twitter.com/FErKJSrlgi

Morrissey throwing another hissy fit is nothing new, but him attacking Johnny Marr who has been nothing short of a saint throughout the years, is truly something I can't comprehend. What an absolute dickhead.

I'd like to add my own personal "open letter" to the Morrissey/Johnny Marr kerfuffle:

You are a twat.

Trying to process the fact that I adore The Smiths but also think Morrissey is a twat. pic.twitter.com/GLIzrZ8zvh

When he’s not supporting far-right groups and moaning about immigrants, Morrissey’s favourite topic has always been himself. He means the opposite of what he says in the letter, and revels in the continuation of his own myth.