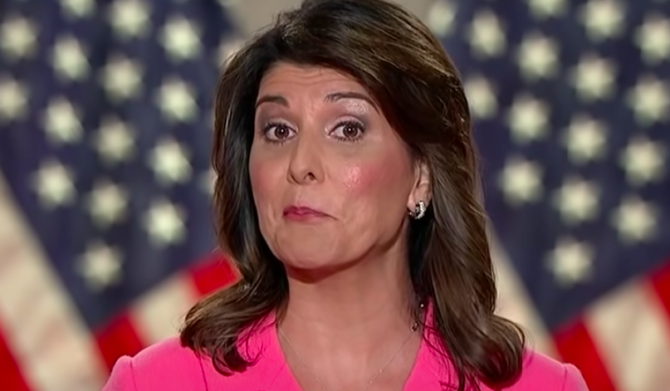 Haley, who is widely expected to seek the GOP presidential nomination in 2024, was asked if she would support Donald Trump should he choose to run again, to which she answered in the affirmative. Not only that, but she wouldn’t even consider running herself.

“I would not run if President Trump ran, and I would talk to him about it,” Haley said. “That’s something that we’ll have a conversation about at some point, if that decision is something that has to be made.”

Haley went on to say that she and Trump had a “great working relationship” and she “appreciated” him and the foreign policy work they accomplished together.

I asked @NikkiHaley if she would support Donald Trump if he runs again in 2024.

“I would not run if President Trump ran, and I would talk to him about it,” she added. “That’s something that we will have a conversation about, at some point.”

That’s quite a turnaround from remarks she made back in February when she told Politico she was “disgusted” by the ex-president, who she claimed had “fallen so far.”

Of course, those remarks were a complete turnaround from what she said about Trump just a few months before that in her 2020 RNC speech, when she complimented his exceptional leadership and called him “a godsend” to America.

Sooooo which is it, Nikki?

Nikki Haley will never be president.

Nikki Haley continues her amazing streak of underwhelming us all to the highest degree.

If cancel culture is real why do I have to keep hearing about Nikki Haley.

Literally not a single person:

Nikki Haley: I will not run for President if Trump does

I’m gonna go out on a limb here, but Nikki Haley will never be president, no matter how many times she switches positions.

Not really sure what the point of Nikki Haley is

Are you sure Nikki Haley isn't Tulsi Gabbard's sister?

We see you @NikkiHaley and we get you and in all honesty and good faith we find you to be an utter embarrassment.

Nikki Haley says she will not run if Trump runs for president in 2024.