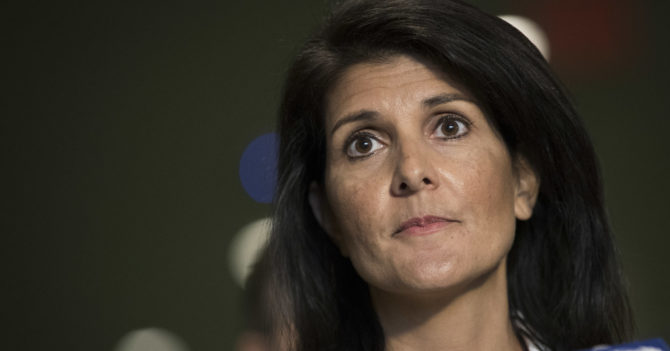 Nikki Haley, the U.S. Ambassador to the United Nations and no friend of the gays, did not have a very happy Pride over the weekend.

On Sunday, Haley says she and her family were booed and heckled while leaving a restaurant along the NYC Pride route.

After the incident, Haley posted this message on Facebook:

We,incl my son, were booed by patrons saying hateful things as we left lunch @ Pride Parade.Our country is better than this. #HateNeverWins

The responds to Haley’s tweet have been all over the map:

For the record: Haley record on LGBTQ issues is pretty bad. As governor of South Carolina, she opposed the Obama Administration’s attempt to protect the rights of transgender students. In 2013, Haley attempted to keep South Carolina from having to recognize same-sex marriages performed in other states.