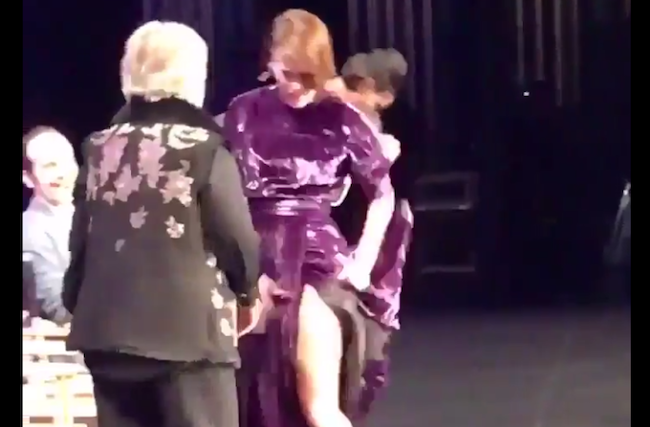 The always-rankled denizens of Twitter are currently furious at Cuba Gooding Jr. for lifting up Sarah Paulson’s dress at an event on Sunday.

Related: Are You Prepared For “American Horror Story: Drag Race”?

According to Digital Spy, Gooding also “tried to pull at her dress after she had taken a seat, which led to Paulson slapping his hand away.”

Though Paulson appears to be laughing and smiling throughout the strange moment, many Twitterers thought Gooding’s antics were sexist and beneath contempt.

They wasted no time in letting that disapproval be known.

@cubagoodingjr playing OJ was the perfect fit, I see the similarities now.

@cubagoodingjr grow up! Pulling up Sarah Paulson's dress wasn't funny AT ALL. You rich celebs think you are God & can do whatever you want.

Okay, but why did Cuba Gooding Jr. lift up Sarah Paulson's skirt at Paleyfest? https://t.co/WgV2W3KZDJ pic.twitter.com/Ywr7ZPSfzG

Um… so is @cubagoodingjr allowed to get away with lifting @MsSarahPaulson skirt at @paleycenter? Total disrespect to a woman

Okay, yes I went back to screenshot this. But does he seriously think this is okay? @cubagoodingjr @MsSarahPaulson pic.twitter.com/xHEnURhY3H