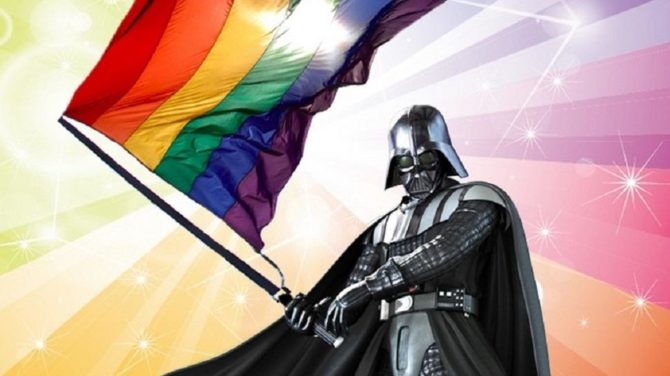 Pop sociologists long have debated what, if any, queer themes lay buried within the Star Wars film series. With the release of the newest entry in the franchise, The Last Jedi, that debate heats up. How, beyond starring gay icon Carrie Fisher in a leading role, do the movies speak to queer audiences?

Of course Rogue One included the are they/aren’t they couple of Chirrut and Baze, and some fans still clamor for romance between Poe Dameron and Finn in future films. Golden Girl Bea Arthur also showed up to do a musical number in the much-maligned Star Wars Holiday Special, which alone is not quite a reason to sit through the biggest trainwreck in Star Wars history (trust us). A tie-in novel published in 2017 also revealed her character is a lesbian.

The greatest queer theme of the Star Wars galaxy, however, has gone overlooked since the series debuted over 40 years ago. The title of the new film alone, The Last Jedi, speaks volumes with its parallel.

As fans of the series no doubt recall, the Jedi Knights once guarded peace and justice in the Old Republic. That changed with the rise of a megalomaniacal ruler, and a genocide that decimated the entire Jedi Order, but for a few lucky survivors. Traitor Jedi Darth Vader used his power to hunt down and destroy the remaining Jedi Knights. Only with the coming-of-age of Luke Skywalker did Vader and the Empire fall, and the Jedi again have the chance to flourish. Another corrupted Jedi and another despot, Kylo Ren and Commander Snoke, then thwarted Skywalker’s efforts to rebuild the order, and now Luke, the titular Last Jedi, stands at a crossroads.

So do queer people. Granted, we queers never guarded peace and justice in the same way as the Jedi, though lesbians do have a long association with earth tones, and gay men have a lightsaber obsession of sorts. Still, men like Bayard Rustin, Harvey Milk and Walter Jenkins did help usher in new eras of justice for all people, as did women like Anna Freud or Margaret Fuller. With the advent of gay rights in the 1970s (which, by coincidence or not, aligned with the release of the original Star Wars), queer culture might have taken on a more defining role in the American idiom, both cultural and political.

Alas, the genocide of AIDS and indifference or even outright hostility by queer bashers, like those who cost us the lives of Matthew Shepherd and Brandon Teena endangered the progress of the queer community. Megalomaniacs like Ronald Reagan, Richard Nixon or George W. Bush cost us basic rights for almost two generations. These vipers had their turncoat henchmen too: closet cases like Roy Cohn or Ken Mehlman spent their careers destroying other out queer men and women in the name of personal gain. Development of drugs to combat HIV, out queers who risked their lives and careers for visibility, and the eventual legalization of marriage equality offered hope to a restored queer community, much as the defeat of Darth Sideous brought hope for a new Jedi Order.

Now another despot, Donald Trump, along with his nefarious minions again imperil the LGBT community. And once again, queer people, much like Luke Skywalker, must make a choice to either retreat from the aggression of this real-life Supreme Commander Snoke, or to press forward, preserving the values and history of our community. The choice may seem clear, but make no mistake, clear choices do not indicate easy paths. As ever, queer men and women standing up for our community, demanding respect, equality and justice for our people will risk their lives. Demagogues like Trump, hateful preachers like James Dobson, or full-on loonies like Alex Jones will forever attack queer folk for standing up for our community, and for what’s right. Nefarious fanatics like Steve Bannon will work to seduce and corrupt our ranks for their own political gain, much in the same way he created fucknut provocateur Milo Yiannopoulos, a real-life Kylo Ren as a way to simultaneously discredit the queer community and to give his message a vessel beyond liberal reproach. (Note that it didn’t work.)

As queer people, that target will always sit strapped to our chests. The question before us is, what do we do about it?

The clear, if dangerous, answer: like the Jedi, we use the Force. Luminous beings that we are, we mobilize our community to create positive change. As queer people, we commit to peace and justice. It is right that we accept this honor to become a force for good in our world. While we might have internal problems of our own, and while we as a community may not have asked for this burden, LGBT folk know the sting of hatred, and pain of oppression. Let this legacy of discrimination become a legacy of justice, that no one, queer or otherwise, ever need suffer bigotry or disenfranchisement. We do this for future generations of queer men and women, that they might enjoy a peaceful, just world. We do it too for those brave queer Jedi who became a Force for good so many years ago.

We do it that no one should ever suffer tyranny again.

Just as Luke Skywalker faces an opportunity in The Last Jedi to train an heir and to restore the Jedi Order to its rightful place, so does the LGBT community face a choice to defend peace and justice within the United States and beyond for generations to come. God, fate, chance or the Force has charged our community with this responsibility. We owe it to our brothers, sisters, ancestors and children to bare this honor.

And so, brothers and sisters, Knights and Padawans, here we stand, the choice clear, the future uncertain. Come what may, we must march onward as a force for goodness, never straying from our core values of pride, love, justice and equality. These are not just the values of the LGBT community, but of the United States as a whole, and we must all do our part to protect them. We do so to protect the peace and justice of the republic, and that our galaxy will never see the chaos of the last queer, the way Luke Skywalker faces a galaxy of chaos as the last Jedi. This is our opportunity, our responsibility, our destiny—to become a force for love.

The future will no doubt hold danger for we queers, the real-life Jedi Order. Our community has confronted danger before, and as ever, we will not back down.

The Force will be with us. Always.