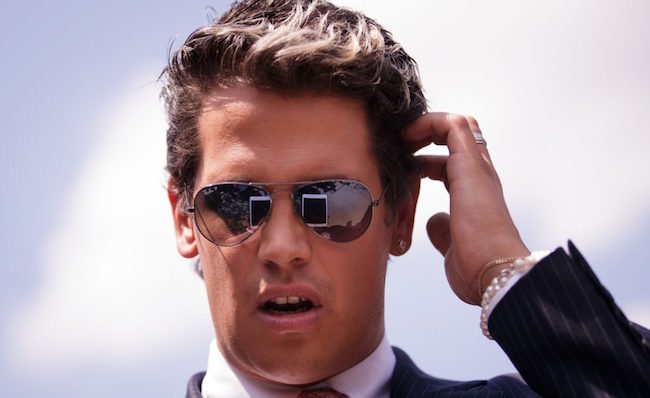 Few people so richly deserve the sort of comeuppance befallen former Breitbart editor, alt-right leader, antigay gay man, and professional troll Milo Yiannopoulos. Unfortunately these days, the world has no shortage of truly despicable people, many of whom are far more powerful and have done far worse than this particular version of evil.

We can only hope that others of his ilk, including his old Breitbart boss, Steven K. Bannon, will find a similar fate, ensnared in their own hateful words, uttered on the record. In the end Milo was, perhaps inevitably, the architect of his own downfall when the political left, right and center all decided, in their own way, at their own pace, that his utterances were the beyond the pale. The problem for Milo is not his opinions–it’s that he’s a fool–or at least played one very well.

But enough with the platitudes. Admit it: you’re in the mood for some good old fashioned schadenfreude, and goddamnit, for once we all deserve to relish it.

So, let’s relive every glorious, slimy moment, minute by minute, of this human diaper genie’s downfall…

In an belated effort the stop hate speech on its increasingly polluted platform, Twitter banned Milo’s account, one day  after leading a Twitter harassment campaign against Ghostbusters actor Leslie Jones (whom we adore).

“People should be able to express diverse opinions and beliefs on Twitter,” a Twitter spokesperson said . “But no one deserves to be subjected to targeted abuse online, and our rules prohibit inciting or engaging in the targeted abuse or harassment of others.”

In retrospect, Twitter’s decision was the first stand against his nasty, hurtful antics.

HBO announces that Yiannopoulos will appear on Real Time with Bill Maher. The criticism starts pouring in almost immediately.

3:37pm
The Intercept co-founder Jeremy Scahill cancels his appearance on the show, criticizing Maher for legitimizing Yiannopoulos by giving him a platform.

Maher releases a statement overnight, defending his decision to include Yiannopoulos on his show’s panel. “If Mr. Yiannopoulos is indeed the monster Scahill claims – and he might be – nothing could serve the liberal cause better than having him exposed on Friday night.”

10pm
Yiannopoulos appears on Real Time. Highlights include Maher and Milo gabbing away like ladies at a coffee klatsch, Larry Wilmore telling Milo to go fuck himself in an online-only “Overtime” segment, and the 32-year-old Milo’s collage-freshman-first-time-at-a-gay-club look. (If at any point you start to feel like we are reveling a bit too much in little Milo’s misfortune, go back and try to get through that “Overtime” clip.) And in a moment that may haunt Milo for the rest of his life, Maher gives him this sage piece of advice: “Look, this is the beginning of your career. People are just starting to hate you.”

Saturday, February 18
9:55am
The Hollywood Reporter reports that organizers of the Conservative Political Action Conference have tapped Milo as their keynote speaker, bestowing more stage time to the simpering clown than to Vice President Mike Pence, Senator Ted Cruz or any of the other rogues gallery of “conservatives” on its roster of speakers.

Sunday, February 19
11:06am
As conservatives continue to blast CPAC organizers, The Reagan Battalion unearths video of Milo speaking disturbingly flippantly about the sex abuse of minors.

This is a must watch!

6:04pm
Milo responds on Facebook to all us “idiots” who listened to his actual words and think he might not take molestation as seriously as he should, claiming to have outted three pedophiles in his career as a “journalist.”

8:14pm
In response to Milo’s claim that their earlier video was “selectively edited,” the Reagan Battalion tweets the full clip from the episode of the Drunken Peasants podcast in which Milo redefines pedophilia for all the world:

8:17pm
CPAC continues to defend the “radioactive” Yiannopoulos. Remember, this is after years of denigrating LGBTQ people and equality.

Monday, February 20
9:29am
Simon & Schuster conservative imprint, Threshhold editions, drops Milo’s upcoming book even though Milo had already cashed a six-figure check from the company, the advance on his book, money it is unlikely to recover.

Author Roxane Gay, who pulled her own upcoming book from Simon & Schuster in protest of the publisher’s deal with Yiannopoulos, is still not impressed: “In canceling Milo’s book contract, Simon & Schuster made a business decision the same way they made a business decision when they decided to publish that man in the first place,” Gay wrote on her blog. “They did not finally ‘do the right thing’.”

Later, he announces that he will hold a press conference the following day.

Under pressure Breitbart editors, Milo resigns as “tech editor” of the publication ahead of his press conference. Breitbart employees had threatened a mass exodus from the alt-right news site if he stayed.

In his 27-minute press conference, Milo—looking every inch the mini-Trump he aims to be in an extra large red tie—lashes out at the media. “You guys are responsible for that, and fuck you for that.” Of course. Because it’s our fault he said those things about pedophilia on a podcast for all the world to hear.

“What I think people saw on my show was an emotionally needy Ann Coulter wannabe, trying to make a buck off of the left’s propensity for outrage. And by the end of the weekend, by dinnertime Monday, he’s dropped as a speaker at CPAC. Then he’s dropped by Breitbart, and his book deal falls through…Sunlight is the best disinfectant,”referring to Milo’s appearance on his his. “You’re welcome.”