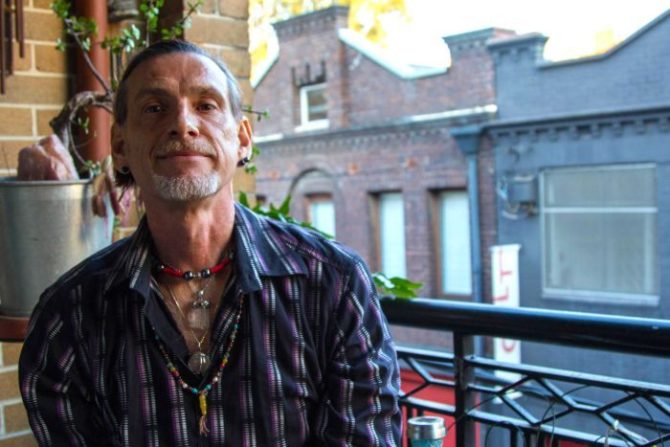 Marque Caban (a.k.a. Panther) is a self-described “psychic wizard” from Sydney. He recently sat down with ABC-Australia to talk about his unique journey from Catholicism to witchcraft.

Without a stable family, Marque’s childhood wasn’t easy. He spent much of it being shuffled in and out of foster care and orphanages, some government-run, others managed by religious orders.

“Even though I was in an orphanage, I spent most of my time alone,” he tells ABC-Australia. “I was the weirdo in the group.”

He continues, “As a kid, I would see colors around people and I would see beings, I guess you’d call them spirit guides. I thought that what I saw everyone could see, but I found out later on in life that that wasn’t the case.”

As all this was happening, Marque was also coming to terms with his own sexuality. On top of that, Christianity was being imposed upon him by his caretakers. He also suffered what he describes vaguely as “experiences of abuse” by certain religious leaders.

To say it wasn’t easy would be an understatement.

For a while, he considered entering the priesthood, but as he grew older, he found himself more and more turned off by the church. When he finally came out as gay, he says, the abuse and discrimination only intensified.

“It was hard enough having that pointed at me, then to be gay and [for them] to say ‘you’re an abomination’ was just horrific.”

Related: A Coven Of Queer Witches Have Placed A Hex On Pharma-Bro Martin Shkreli

That’s when he discovered Paganism and witchcraft. He was introduced to Wicca by Leonora Jackson while he was working at a bar.

“She knew straight away that I was a hyper-sensitive person, and that I could feel and see things that I wasn’t quite sure how to control,” he recalls.

After striking up a friendship, Leonora inducted him into her coven,where he’s been a member now for over 30 years.

“A coven is a place of security, safety, where people can come and learn certain things, and express themselves in certain ways that might otherwise be unacceptable in other parts of society,” Leonora tells ABC-Australia.

Wiccans live by the belief: “Do what thou will, as long as it brings no harm.”

Leonora taught him his sexuality, his visions, and his feelings were all OK.

“I think most [people who] study the occult or psychic awareness and so forth, they have a calling–it’s part of them,” she says. “Because they know there’s something beyond just plain, old living, and they’re driven to go look for answers.”