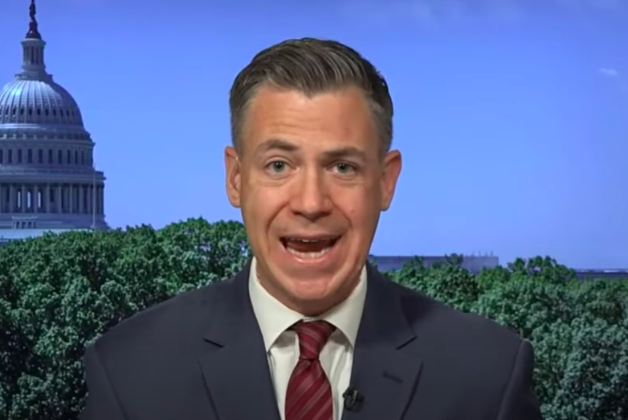 “The title of fire female four-star officer gets taken by a man,” Banks tweeted Saturday.

NEW: Twitter has censored @RepJimBanks for calling HHS’ Rachel Levine a man. He will be locked out of his account until he deletes the tweet, “The title of first female four-star officer gets taken by a man.” pic.twitter.com/6wdDqJ36kH

Sadly, the tweet isn’t the least bit surprising if your at all familiar with Banks’ record on LGBTQ issues. In addition to opposing same-sex marriage, he says banning trans people from serving in the military is an “emotional issue” and he opposes the military paying for sex reassignment surgery because, as he puts it, “I don’t think taxpayers should be on the hook for that.”

Banks, of course, is playing the victim. Unable to tweet from his @RepBanks account, he tweeted from his personal @Jim_Banks account instead, writing: “Twitter has suspended my official account for posting a statement of FACT. I won’t back down. I’ll be posting on my personal account for the time being. Please Retweet this message and follow me ->@Jim_Banks. Big Tech must be held accountable!”

I won’t back down.

I’ll be posting on my personal account for the time being.

Big Tech must be held accountable!

Nothing like an anti-LGBTQ politician using big tech to rail against big tech and whine about holding people accountable as he’s being held accountable for making transphobic remarks.

You’re statement was not a fact, and you broke the contractual agreement you made with Twitter when you signed up for the service. They are within legal rights to suspend or shut down any accounts you have for that. You agreed to that when you signed up.

Here’s a suggestion. Quit using your influence and office to incite harassment against marginal groups and individuals. It’s not hard!

No, you’re being held accountable for breaking Twitter’s ToS. 😹

Get with the times and be respectful.

Big tech held accountable for what? You did wrong. But hey blaming others for your wrong doing is pathetic.

So you are letting us know that you have been blocked from tweeting by @Twitter while you are tweeting? This doesn’t make sense. Maybe just try to not be transphobic

Thank you for pointing out how politicians do not understand the constitution or laws. Twitter is allowed to censor you in anyway, they are a COMPANY and not the government. They aren’t violating your rights because Twitter isn’t a governmental entity.

Since I can’t read the original statement that got you suspended, could you please repeat it here. Pretty please!