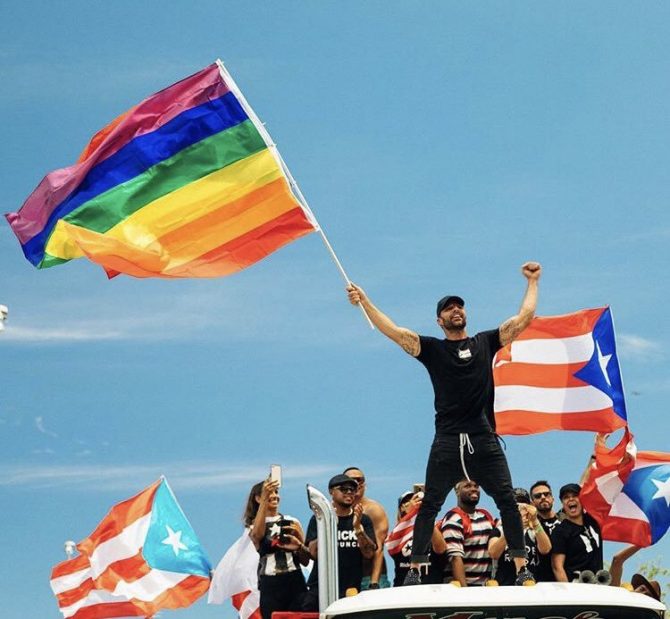 Out pop star Ricky Martin has taken to the streets of his native Puerto Rico to protest against governor Ricardo Rossell├│.

Though Rossell├│ has said he will not seek reelection following a leak of more than 900 pages of text messages in which he used homophobic slurs and expressed many other sentiments insulting to Puerto Ricans, hundreds of thousands of protesters took to the streets of San Juan on July 22 to show their opposition.

Ricky Martin joined with thousands of other Puerto Ricans to demand Rossell├│ŌĆÖs immediate resignation. Images of Martin waving a Pride Flag amid the crowds went viral on Twitter, as did MartinŌĆÖs own tweets regarding Rossell├│.

ŌĆ£How proud I am to be Puerto Rican. What strength I felt from my people. We continue in the fight until @ricardorossello DonŌĆÖt rule anymore,ŌĆØ Martin wrote in one tweet.

The ŌĆ£TelegramgateŌĆØ scandal has ensnared the highest levels of the Rossell├│ government. Rossell├│ŌĆÖs former finance minister referred to Ricky Martin personally in one message, writing ŌĆ£Ricky Martin is such a male chauvinist that he fucks men because women donŌĆÖt measure up. Pure patriarchy.ŌĆØ

Rossell├│ himself also referred to a number of fellow politicians and journalists as ŌĆ£c*cksuckers.ŌĆØ

Harvey Fierstein is one of the ŌĆśBrosŌĆÖ and kinkier than ever

‘The White Lotus: Sicily’ goes full frontal, introduces us to Niccol├│ and his giant… pupils

Today at 7:12am
We use cookies on our website to give you the most relevant experience by remembering your preferences and repeat visits. By clicking ŌĆ£AcceptŌĆØ, you consent to the use of ALL the cookies.
Cookie SettingsAccept
Manage consent