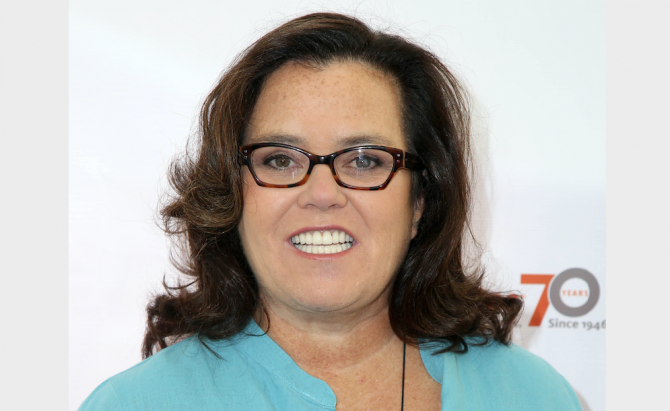 This profile is fifteen of Queerty’s 2020 Out For Good series, recognizing public figures who’ve had the courage to come out and make a difference in the past year, in celebration of National Coming Out Day on October 11.

Bio: A comedian since high school, Rosie O’Donnell got her big break on Star Search before landing supporting roles in the films A League of Their Own, Sleepless in Seattle, and The Flintstones. She got her biggest platform, however, with The Rosie O’Donnell Show, which earned five consecutive Daytime Emmy Awards for Outstanding Talk Show and earned O’Donnell a reputation as the “Queen of Nice” over its run from 1996 to 2002.

From 2006 to 2017 and then again in 2014, O’Donnell joined the panel of The View, never mincing her political views and criticizing former President George W. Bush and future President Donald Trump. In recent years, O’Donnell has returned to acting, appearing in Hairspray Live!, playing lesbian trailblazer Del Martin in When We Rise, and starring on the Showtime series SMILF.

Coming out: O’Donnell officially came out on stage at an Ovarian Cancer Research benefit in 2002. “I’m a dyke!” she said, as USA Today reported at the time. “I don’t know why people make such a big deal about the gay thing. … People are confused, they’re shocked, like this is a big revelation to somebody.”

She also hit back at accusations that she hid her sexuality by raving about Tom Cruise on her talk show. “I said I wanted him to mow my lawn and bring me a lemonade,” she said. “I never said I wanted to blow him.”

How it made a difference: O’Donnell came out publicly not just to live her authentic life but to shed light on an important issue: the right of same-sex couples to adopt children. At the time, two gay men in Florida faced the prospect of having their foster child removed from their home, and O’Donnell—as the foster mother of child from Florida—could relate.

“Come to find out, in order to adopt this child, I would have to perjure myself, would have to sign a document that says in the state of Florida that I am not bisexual or homosexual,” she said at the 2002 benefit, per USA Today. “The fact that I was unwilling to sign that document meant the child was removed from the house.”

O’Donnell agreed to talk about her sexuality in a sit-down on Primetime as long as Diane Sawyer covered Florida’s gay adoption ban. “I would like to talk about my life and how [the case] pertains to me,” she told Sawyer before the interview.

That statement says a lot. For O’Donnell, coming out meant making a direct appeal to her fans to humanize an issue at the most precarious of times. Doing so earned her a place in our hearts, and forever in the queer history books.