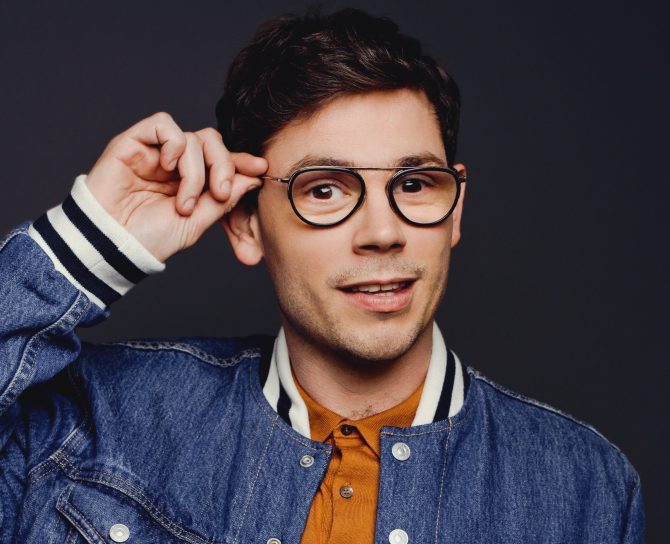 I first connected with Ryan O’Connell in December of 2016. I had been working on a Queerty story–appropriately titled “Is Hollywood Finally Ready To Portray Disabled Gay Characters?–when I decided to reach out.

At the time, O’Connell had just finished writing a show about a gay and disabled character, based on his own life. He was excited about the idea of people seeing the show, but was struggling to find a home for it. After all, O’Connell pitched the show to six different networks, and they all passed.

“Here’s the thing: Putting a gay disabled character on television is very hard,” O’Connell said at the time. “Hell, putting a gay character as the lead of a TV show is hard. We’ve come a long way in the past few years, but the reality is that Hollywood is still living la vida Kevin James.”

When asked why he thought this was, O’Connell did not hold back. “I think Hollywood is largely not interested in disabled people because they don’t view us as ‘sexy’ or ‘cool.’ To [Hollywood], we are just sad and something to be pitied.”

Fortunately for him (and me, a gay and disabled fellow myself), the TV gods saw something sexy and cool about O’Connell. Nearly two and a half years after our initial conversation, it was announced that Netflix would air what is today known as Special.

And with season one of the show finally out for the world to see, many are thirsty for more. Queerty (okay, it was me) recently reconnected with O’Connell to get the scoop on what a second season of Special would look like (as of press time, no renewal has been announced), whether fame has gotten to his head, and why O’Connell is eager to take the next flight to Brazil, stat.

Ryan, thanks so much for taking time to chat. It’s been more than two months since Special premiered. How has life been? Have you had to like, avoid walking around The Grove, in fear of getting trampled?

Wow, trampled at The Grove. Is there anything chicer? (Actually, yes. Plenty of things.) I’m not gonna lie, life has been psycho. A few weeks ago I was getting hair and makeup done for some event, when my groomer just started performing energy work on me. It was then, in a full face of makeup while my forehead was being poked in an attempt to center my chakras, that I realized ‘Hmm. Maybe my life has changed a little.’

You always hear how fame has a way of “changing a person” which I think is a nice way of saying “fame has a way of turning some people into complete, batsh-t crazy lunatics.” Now that Special is out, have you noticed a change in your “celebrity status” so to speak, and how have you been handling it?

Are you asking if I am a disabled diva dictator now? [Laughs] No. I think having cerebral palsy is like being served the biggest slice of humble pie every single day. The second you start feeling yourself, you accidentally drool on a stranger and you are brought right back down to earth.

My editor wanted me to ask if fame has had any effect on your love life, but I understand you have a boyfriend, right? What’s he think of the show, and all your success?

I’m getting a surplus of DM’s from hot gay men in Brazil. Apparently everyone in Brazil is gorgeous and wears a speedo to their office – which is the beach – so I would love to visit there soon. And my boyfriend Jonathan is a total sweetie angel as per f*cking usual. He’s sort of like my stage mom. He’s always encouraging me to go after the things I want, even if those things are sexy men from Brazil, and seize the moment. I feel very lucky.

Thank you @lapride for a magical day ?

It seems everyone and their mom loved Special. How has the reaction to the show been on your end, from both the disabled and non-disabled community?

It’s been crazy positive. The response from the disabled community was the most important and meaningful for me. Whenever you’re one of the first people to tell a story about a large portion of the population that’s been ignored, there is pressure to get it right. And I had a lot of anxiety, because I knew that I could only speak from my experience. But everyone has just been so supportive.

I know after it premiered, a lot of people reached out to me personally, saying things like ‘You should be in this show!’ or ‘I saw so much of you in that character!’ How does hearing things like that feel? I can’t imagine the pressure of having to speak for and represent an entire population of gay, disabled folks.

I’ve only encountered a little bit of that. Sometimes people will tweet at me things like, ‘Are there going to be disabled POC or trans characters next season?’ and I get overwhelmed because I have no idea what next season’s going to look like storytelling wise. Really, my hope is that the success of Special forces Hollywood to pay attention and greenlight other shows from disabled creators. It’s ridiculous that 1 in 4 people identify as disabled and there are only two shows (me and This Close) on the air from disabled people.

I think a lot of people, no matter how well-intentioned, forget that – even though so many of us share the same disability – our experiences can be so very different.

Absolutely. And it’s not like ‘Oh, we have Special, yay, disabled people are accounted for, we’re good now!’ This is just the tip of the iceberg.

That said, I loved seeing someone like me (a fellow disgaybled) represented in a show. I found myself getting weirdly emotional during all the little moments, like when your character is struggling to shuffle a deck of cards, or button-up his shirt. Was including these little moments intentional on your part?

Sure. I mean, I just always tried to write from a place of truth. I wasn’t sitting there trying to hit certain marks or thinking ‘I need to show this and that.’ You write the story you want to tell, and from there, you include the things you need to serve that story.

Now let’s talk that sex scene, which was so wonderful and beautiful and amazing, mostly because it was just so normal. Did you always know how you wanted that scene to play out?

I did have a vision for that sex scene and thank god I had [co-star] Brian Jordan Alvarez, my director Anna Dokoza, and my director of photography, Phillip Roy, to help me bring it all to fruition. I just wanted to create a scene that felt real, that felt like the sex I’d been having for the past 14 years. Representation of gay sex is mostly nonexistent, and if it is included, the camera pans away or it’s some porny journey. I wanted to just be authentic and showcase the awkwardness and humor and tenderness that is getting f*cked in the ass.

Your character loses his virginity to a sex worker. Did you ever have any hesitation about that?

F*ck no. I love sex workers and think they’re totally under appreciated. A lot of that scene is borrowed from my IRL experiences with them.

Also kuddos to you for choosing the missionary position, which I’ve legally decided is one of the best positions for disabled people when it comes to f*cking.

Yas! Although I also like being on top, I’m a power bottom bitch who loves being in control.

Finally, who do I need to troll to get a season 2? But seriously, has there been any word on a getting a season 2?

If you want a Season 2, tell Netflix.

If you do get one, what are you hoping to accomplish in season 2?

It’ll be gayer and gimpier.

Related: Ryan O’Connell disables our stereotypes and swells our pride in ‘Special’