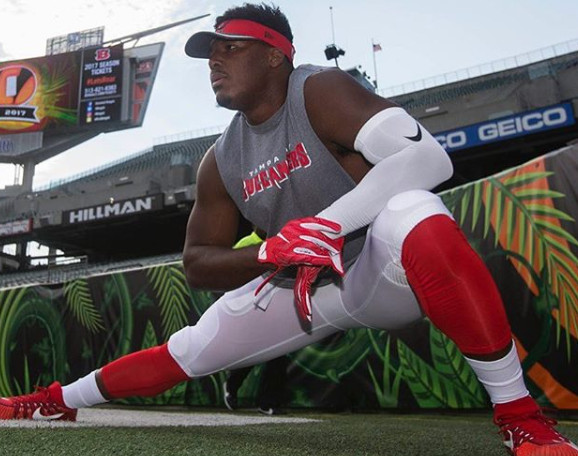 This profile is part eight of Queerty’s Out For Good series, recognizing public figures who’ve had the courage to come out in the past year in the name of the public good. The series will run through National Coming Out Day October 11.

Bio: Russell grew up in Texas, where he showed immediate promise as a football star. While in high school, he played as a defensive lineman for Creekview High, leading the team with 62 tackles. His talent won him a scholarship to Purdue University, where he played four years as a defensive end and linebacker. Having racked up 142 tackles in his four-year college football career, the Dallas Cowboys came knocking, recruiting Russell in 2015. He spent two years with the team, before transferring to the Tampa Bay Buccaneers for another two seasons. A shoulder injury kept him from playing a good chunk of the 2018 season. Around the same time, Russell’s best friend, Joseph Gilliam, succumbed to cancer. Russell sank into depression, leaving, he hoped temporarily, the NFL to recover.

Coming Out: Russell penned an essay for ESPN in August 2019, reflecting on his football career and detailing his struggle with depression. He also revealed another source of his pain: for years he’d felt forced to live in the closet as bisexual for fear he’d lose his career. Russell felt couldn’t bear hiding anymore. “During my first few seasons in the NFL, I rationalized my fear because it was easy to convince myself that hiding who I was made the most sense,” he wrote. “But after my departure from the Dallas Cowboys, confiding in a few loved ones about who I am, and getting a new chance to play for the Tampa Bay Buccaneers, I started feeling the freedom of transparency — even if it was small at first — and the fear of people finding out and rejecting me slowly dissipated. Being more comfortable in my own skin made me a better teammate.” Russell has not returned to the NFL yet, but hopes to do so in the near future. As part of his coming out, he also posted a love poem to his boyfriend, Cory O’Brien.

Making a Difference: Russell used the occasion of his coming out as a call for others to do the same, and for the NFL to embrace queer players. “There are a lot of problems in the world, and a lot of issues facing the NFL,” he wrote in his coming out essay. “And I can say with confidence that LGBTQ players having the comfort to be themselves, date who they want, share parts of their life with friends and teammates will not rank among those issues.” He also made clear that he came out not to cause a media circus, but because seeing other players helped him take pride in being himself. “[T]he best version of myself, the best partner, the best friend, the best teammate, is one that’s open and honest. Next, it will be a signed player, then a Pro Bowler, then a Super Bowl champion who embraces who he is publicly.”

“Love takes off masks that we fear we cannot live without and know we cannot live within.” James Baldwin. Thank you @humanrightscampaign for welcoming me in such a loving and accepting way. I’m extremely fortunate that my coming out has been a liberating and positive experience for me in many ways. Saying that I also know that I’m lucky because it is not the same for everyone who speaks their truth. I can only hope to celebrate the next brave soul that chooses truth over fear. I have heard incredible stories of triumph along with missions of change. I’m honored to even be mentioned amongst you. @ricky_martin @dominiquet.a.r.jackson @thejakechoi @alphonsodavid @secarmy22 @chuckschumer #WeAreHRC #hrcnationaldinner