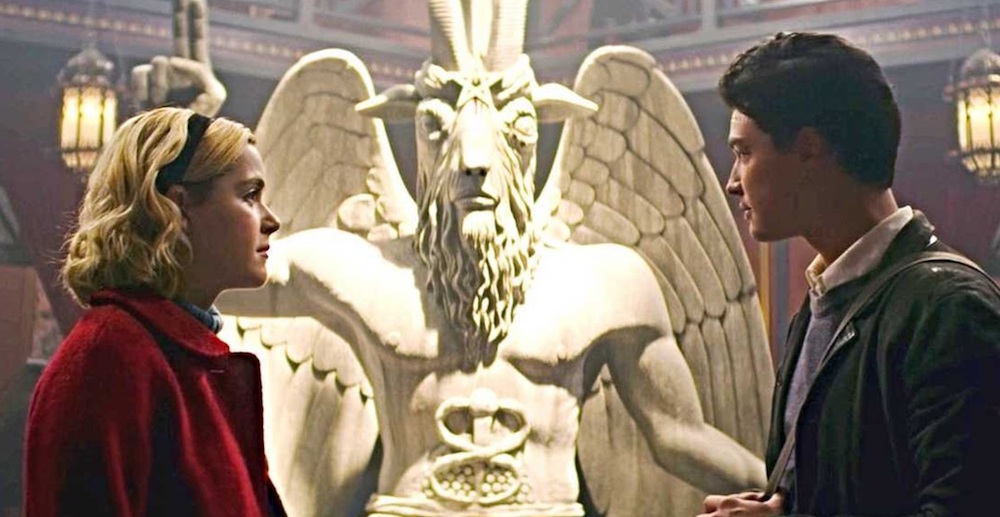 Earlier this month, The Satanic Temple sued Netflix and Warner Brothers for $150 million in copyright infringement after its supernatural drama series, The Chilling Adventures of Sabrina, featured a statue nearly identical to the Temple’s trademark Baphomet statue.

The lawsuit seemed unfortunate since both the Temple and Sabrina are LGBTQ-friendly and interested in worshipping The Dark Lord. But praise Satan: They’ve reached a settlement.

The statue in question graces the lobby of The Academy of Unseen Arts, the magical school where the show’s heroine studies.

The Temple originally sued because the statue is basically the same as the one that they use to publicly promote their work: a statue of a winged, enthroned, goat-headed idol with two young children at its sides.

When the series premiered, Satanic Temple co-founder Lucien Greaves said that his organization would take legal action against Netflix and Warner Brothers for “appropriating our copyrighted monument design to promote their asinine Satanic Panic fiction.”

For purposes of comparison… pic.twitter.com/AZJvmq1Cks

Part of their displeasure came from the show’s depiction of Satanists as a deceitful, cannibalistic, bloodthirsty and cruel lot whose ritualistic beliefs are just as rigidly dogmatic as conservative Christianity.

But the Satanic Temple doesn’t even believe in the Devil or anything supernatural. Rather, they employ Satan as a symbol for “opposition to arbitrary authority, forever defending personal sovereignty even in the face of insurmountable odds.”

The Temple uses the Baphomet statue as a way to challenge conservatives who erect religious monuments on public grounds.

Related: This gay couple hired a company to create wedding programs. They received “Satan” pamphlets instead.

Announcing the settlement of their lawsuit, Stuart de Haan, attorney for The Satanic Temple, wrote,  “The Satanic Temple is pleased to announce that the lawsuit it recently filed against Warner Bros. and Netflix has been amicably settled.”

He said old episodes featuring the statue will add credits acknowledging “the unique elements of the Satanic Temple’s Baphomet statue. Future episodes with the statue will be covered under “remaining terms of the settlement [which] are subject to a confidentiality agreement.”

We’re happy to hear this as both groups are LGBTQ-inclusive. Sabrina featured a genderqueer character alongside some pansexual ones, and The Satanic Temple has long trolled anti-LGBTQ conservatives, even conducting a “Pink Mass” over the grave of Fred Phelps’ mother in a ritual meant to posthumously turn her gay. (Fred Phelps was the founder of the “God Hates Fags” Westboro Baptist Church.)